A Physical Manifestation of a Life-Walking Private Hell 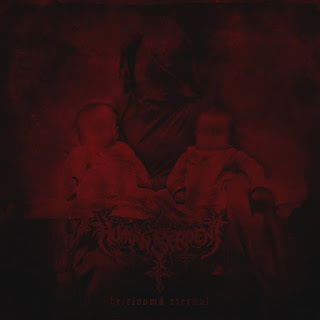 Its not often an album moves me as much as this one does. Human Serpent, hailing from Greece, have come together to create one of the most soul crushing and emotionally brutal album. It is a bleak outlook towards one own self, and to quote from the band, 'It is a physical manifestation of a life-walking private hell.' and they couldn't have been more correct. Just the opening of the album is a visceral expression of true human aggression. A bestial representation of the true nature of man, bringing forth the idea of true hatred towards everything, and ones self.

A Thousand Limbos Of Mind, the opening track, carries you on a ferocious journey with perfect melodic picking coming from X the vocalist and guitarist, bringing together a melodic and at time very catchy pace, accompanied with the primitive and precise drumming from I. They've brought on a third member, known as 23, who plays bass, and them having a dedicated bassist rather than X doing double duty, allows for both a more diverse and complex guitar riffs compared to their older albums, and adding on
top a layer of gut punching drive to the songs. The bass being most prominent and most interesting in black metal standards on the second track Maze of Reminiscence.

There are some impressive vocal feats on this album. X truly lets out pained and echoed screeches coming from the bottomless black pit of what ever soul he has inside of him. There's something haunting about the performance that leaves it echoing in your mind for days after listening, like hearing the dying breaths of a relative, or the screams of the damned, it's hauntingly tragic. Towards the ending of the third track Fuck Normality, there's an impressive section where he holds an incredibly long and powerful screech that pierces you straight to your core. It's continued into the next track Heirlooms Eternal, which introduces the slower parts of the album, a change for the band's discography for sure.

The fifth track, Memories Are Rooms of Pain is probably the most emotionally crushing off the whole album. The guitar swell up in a sad anger with a crushing build up half way through that breaks into a deeply melancholic riff, with the drums slowing down, the bass creating an amazing support to add onto the deepness of the double peddle bass drums as X wails on the guitar, creates a rather pleasant and contemplative moment for the album. As the song comes to a close, you hear the echoes of a clean, but reverberated guitar, creating a soft and melancholic melody that leaves you at a sense of peace. That is until the pained scream of Vomiting the Herds the next track kicks in, putting it back into the hateful overdrive one is typically used to.

All in all, this album is in my opinion the best black metal album to have come out this year, and this came out right around January. Its got everything that makes black metal what it should be. A true classic that will stand the test of time along side some of the greats.