Celestial Hymns to the Absolute Majesty 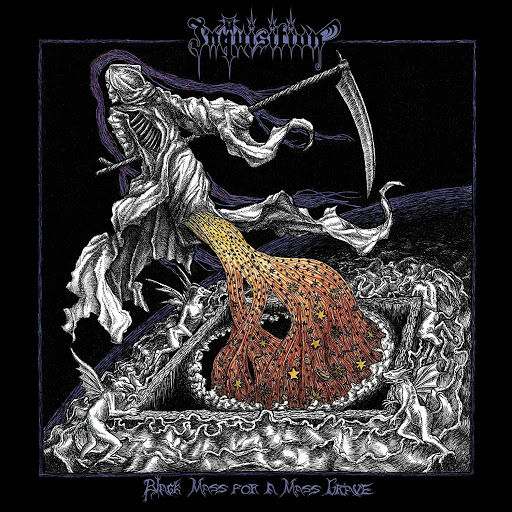 Black Mass for a Mass Grave, the latest album released by the celestial messengers and black metal legends Inquisition, a two-man band with founder, guitarist, and vocalist, Dagon accompanied by drums played by Incubus. These two have been spreading the word of Cosmic-Luciferianism through their music, characterized by Dagon's distinct play style of using the guitar to its fullest extent, making sure to hit every note, and creating powerful chords as Incubus' pours his hated into the drums, creating an exciting and rather different sound in the Black Metal scene that is distinctively Inquisition. Their latest album, though, takes this to a different direction.

The band, sonically, seem to be calming down, approaching this album with an almost doom metal type approach, with slower riffs and steady paced drums that create the back-bone for the guitars to paint their colors.  The opening track 'Spirit of the Black Star' is a familiar sound, yet fresh approach to fans of the band, having layered guitars, one steady tremolo picked wall of sound, with a sort of lead guitar (both played by Dagon), with a cleaner, albeit celestial sound to it that seems almost more fitting for some 70s psych-rock band, which is very out of the ordinary for Black Metal, but boy does it deliver. Dagon has always been known for his strange croaked vocals, where in some albums people describe him as a demonic toad, while in others Baphomet's goat head seemingly provides vocals. But with 'Black Mass..', Dagon delivers the signature croak, but with a more 'natural' feeling to it. Providing an image, at least for me, of some sort of star worshipping goat-man who sings out his hymns under the star-lit sky.

It would be easy to say as well that this album is probably their most easily accessible in terms of sound to those who're not really into the extreme side of music. Much of it is inspired by their love of more traditional metal genres, like Thrash and of course being heavily inspired by British Heavy Metal movement back in the day. I'd wager that any metal-head can find something they'd like about this album. Through out the album as well are synth organs, which are a first for the band, but a welcomed edition. While many 'TRVE KVLT' elitists would argue that synths have zero place in black metal, Inquisition seems to have figured out a way to keep the tradition 'trve' while also adding an atmospheric layer. For example the song 'Triumphant Cosmic Death' has a little synth organ interlude that creates a pagan like atmosphere with a little tune that could've come out of some fantasy world, but yet it fits right in with the assault from the guitars and drums.

There are many of those moments through out the album that seem to ground the musicians back to Earth while at the same time launching your higher-self out into the celestial zenith. And that, my dear readers, is the message behind the band, spreading the word of the great Demiurge we seem to be stuck with, while the universe its self, is our true life givers, the true gods are the celestial bodies that dot the endless blackness of space. To this band, Satan is very much a real thing, but not like how the regular person perceives it. Satan, to them, isn't some evil creature with a pitchfork and redskin who hangs out in really got locations underground, no sir. Satan, or rather, Lucifer, is the star of knowledge, the 'sun (son)' if you will. It was he who brought man the knowledge and power that we have now, a greater celestial power that has been with us since the ancient times of the Sumerians, and Inquisition wish to provide those with that untapped power we've all but forgotten, with an outlet through their music to embrace such powers. This album is a dedication to that, a true Black Mass for congregation of the Universe.

This is a must listen for those who're fans of the band, and of the genre of black metal.