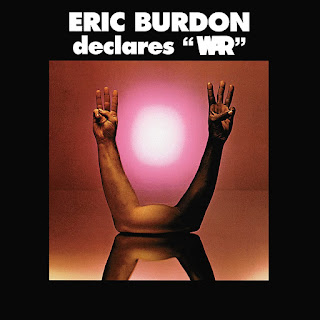 Eric Burdon, our charming ringmaster in this musical circus, introduces us to War's first official album release, 'Eric Burdon Declares War'. Released in April of 1970, this album introduced the world to the now legendary funk-fusion super-group War, with Eric Burdon of 'The Animals' fame, lending his sultry and harsh voice to the band for this release and the next, providing a powerful and distinctive voice that mimics other soul and funk singers at the time, though, to me at least, a true sense of originality with plenty of passion and almost aggression in his performance, a clear rock influence from his past in 'The Animals' that later stuck with the rest of War's discography, having a rock and roll bent to many of their songs.

The album sports a short 5 tracks, but, the songs being long, winding jams that take you on a musical journey, provided by the bands masterful control over their instruments. At the time the heavy Latin influence in the song wasn't really heard of much, outside of Santana and his band, the genuine diversity in the band provides a colorful and vibrant sound to many of their songs, a true representation of the American melting pot.

The one song that stands out to me, and is one of my personal favorite tracks of all time, Spill The Wine, tells a psychedelic story of a strange dream Burdon has, a song that became a very popular hit off the album, and brought War into the mainstream music world, while, for Burdon sort of meant the end of his major hits, with his solo albums not really taking off as much as his past work did. The first track as well, The Vision of Rassan is another one of my favorites off the album, the story of a slave ship coming to the new world, with Burdon along side the help of backup vocals mimicking the sound of slave songs, builds the song up as the character in the story slaves away, with Burdon's powerful voice in the chorus, being the slave driver making them work harder. Really paints a vivid image of the time with a really fun, funky groove in the background supporting the whole song. Of course everyone can interpret lyrics in their own way, to me, that's what's being told, an old slave song to help pass the time as one works.

The album ends on a soft note, with a grand gong introducing you to the beginning of the end, a longing love song gently lays us down to rest on the album. 'Eric Burdon Declares War' is a strong introduction to War's music, along side their wonderful album 'The World is a Ghetto' shows how the band went after Burdon left to pursue his solo career. I would highly recommend giving this one here a listen sometime soon.