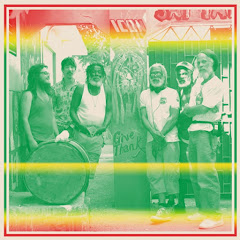 Back in the 2010s, the record label RVNG International released a series of intergenerational collaborative albums, named FRKWYS, that sought to bring together artists across different generations together to experiment with how newer sounds mix with the old tried and true way. The 9th album in the FRKWYS series saw two very different groups form together to create a very unique, and truly beautiful album. Legendary roots-reggae and dub artists The Congos collaborated with two experimental minimalists, Sun Araw and M. Geddes Gengras. Now, the Congos are famous for their unique vocal deliveries, and wonderful harmonies, mixing the trippy, ghost-like, falsetto provided by Cedric Myton and a deep, booming and commanding baritone voice provided by Watty Burnett, and the steady and smooth tenor provided by Roy "Ashanti" Johnson, really grounds the dream like effects Sun Araw and M. Geddes provide in their production style. The lyrics are simple, and typical in the dub genre. Preaching about freedom, nature, love for each other and your self, and most importantly to a higher power. It really adds a sense of spiritual release for the artists and the listeners as well. I'm not too familiar with M. Geddes work but I am a rather big fan of Sun Araw's work, which tends to be very minimalistic and ambient, creating electronic noises that tickle the imagination and can really enhance a psychadelic trip.

Both Sun Araw and M. Geddes though came into this project rather hesitant at first, as well as the Congos as a whole. They came into the album, rather intimidated, stepping into a completely foreign Rastafari culture, telling a legendary trio what to do and how to do it, when they've been at the music scene for much longer than these two boys were around and it really shows in the music as well. The first half of the album seemed to be more focused on the production style, clearly the two new-comers trying to take control, while the old trio seem to provide little vocals here and there, not sure how to approach this new generation of music. But, something clicks about half way through the album, like something clicked with them all, the vocals become more prominent, especially in the song 'Jungle' a fun, tropical jam that reminds one of 'The Lion Sleeps Tonight', but on a heavy dose of mushrooms. But it seems to come from a deeper place from the Congos, they understood how this music can be used as a way to express their spiritual beliefs through chants just like how our ancestors have for the longest time. The song 'Invocation' provides the best example of that. A steady tribal drum beat accompanies a powerful sermon provided by one of the Congos' members as the group sing praise to Rastafari in a choir like performance in the background. As the song continues through, the dream like synths slowly build up in the background, with Sun Araw providing a wonderful bassline that fully completes the song and brings it where it needs to be.

This album, in my opinion, is how the future of dub could sound. Sun Araw and M. Geddes really prove to themselves and others that they can accomplish something many people wish they could, take something old and push it forward, creating a new beautiful work of art, while still keeping the tradition and the essence of the original source still alive. I'm reminded of Lee Scratch Perry and Augustus Pablo, two legendary Dub artists who've made highly experimental music for its time, but of course, their original source being the Roots styled Reggae of Jamaica
. They saw to push the genre forward by experimenting with the mixing board, adding strange swirling effects and creating more of a journey for those listening than your regular roots reggae song would sound. 'Icon Give Thank' could stand up with those albums, providing for a new generation a source of inspiration.