In Honor of Steve Sylvester 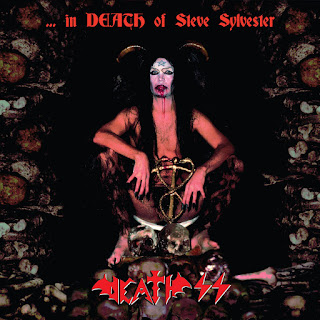 Its 1988, you walk into your local record store and notice a strange imported record from Italy with a man sitting on a pile of skulls dressed like some sort of demonic creature. With your curiosity getting the better of you, you decide to pick it up and give it a try. How bad could it be? The album begins with a track called 'Vampire', greeting you with an ominous bell ringing in the background, and a devilish voice whispering evil things out, soon, you'll be greeted hard hitting drums and a chugging guitar, with a snarling voice screeching out in the night. This is Death SS' first album '...In Death of Steve Sylvester' a morbidly fun album, that is so unique for its time. With the likes of Alice Cooper and Ozzy Osbourne being the cutting edge of shock-rock at the time, this small Italian band made a large impact in the metal scene in Italy.

The band truly started back in 1977, with Death, also known as Paul Chain, and SS, or otherwise known as 'The Vampire', being Steve Sylvester. These two were big personalities and big ideas on where to take their music, both of them love the B-movie horror aesthetic and occult imagery. But yet, both of them were in competition with one another, competing for the lead role in the band, but it didn't stop them from releasing music through out the beginning of their career. Boasting 3 demo tapes and an EP that are all fairly impressive for a first time band, but clearly the clashing of ideas were still there. There are two songs on their first album that date back to their first demo, 'Terror' and 'Murder Angels', both being the best two tracks on the album in my opinion. But, it came to the point where the arguments had come to a conclusion where Steve Sylvester was forced to leave the band, and Paul Chain, taking the band in the direction he wanted to, still using the name Death SS to record music, but the other members began to see the changes that were being made. Paul, would  then take the remainder of Death SS and go off to form Paul Chain Violet Theatre, which then later became simply, Paul Chain. So then, in 1984, as far as anyone was aware of, Death SS, was finally, laid to rest.

Legend has it though, one fateful night on June 5th 1987, Steve, who many thought was actually dead after he left the band, was surprisingly not dead, and had luckily got the rights for Death SS, and thus forward, Death SS of Steve Sylvester was born. He then went off to record the first full length album, which I mentioned here already, '...In Death of Steve Sylvester'. Its a very fun album, with that old school 80s heavy metal style and production. There is one thing about this album that does get better in their later releases, but its the vocal deliver Steve gives on this album. He sings in an almost punk-style way, sing-talking the lyrics in a snarl that at times sounds like he's either trying way to hard, or not even trying at all. But it adds to the overall aesthetic of the album, sort of like an old-school 50s B grade horror movie. With songs like 'Black Mummy' and 'Werewolf', even the members of the band dressing up like characters straight from the silver screen. It creates a really fun style that melds perfectly with the style of metal they're playing, which is rather unique for its time. Mixing elements of speed, thrash, doom, and even first-wave black metal in the style of Venom, which is another big influence this band took from. The guitars honestly shine in this album, with solos in every other song that really never get old, and great licks that stay stuck in your head, like the opening track 'Vampire', the riffs over the chorus have not left my head since I gave this album a listen.

If you can get past the vocals, I'd recommend this to anyone who is a fan of true 80s heavy metal.