In the Hour of the Centaur 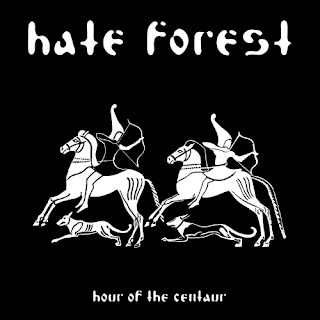 The pounding of hooves rumble to earth beneath you. Peering up the hill you see a horde of horse-backed warriors line the hill-top, the sun making their bronze armor shine a blinding light. But the sky grows dark as a wave of arrows block out the sun, blanketing the land below them in a hellish bombardment of arrows. These are the Scythians. An ancient tribe originating from Siberia, but managed to conquer much of the steppe lands and even up to Greece during the 5th century BC. They are a fierce people who's presence have made waves through out the neighboring cultures. The Greeks in particular, making two famous mythological character, the centaur. The centaur in Greek myth are a mixture of the torso of a man and the legs of a horse, representing the perfect symbiotic fusion of man and horse. Being fierce warriors its easy to draw the correlation to the Scythians, being famous for fighting all their battles on horse back, and their culture its self revolving around the horse. Its typical for a Scythian child to be raised on horse back, mastering the skill in their early childhood. Even the famous image of the Amazonian warrior, the fierce warrior women of Greek myth were as well, inspired by these people.

Now you must be thinking to your self, what does this mini-history lesson have anything to do with the Ukrainian Black Metal band Hate Forest? Well, their latest album, which came out December 25th, 2020, 'Hour of the Centaur' is as love letter of hatred to those who oppose the Scythian might. Much of the origins of the Scythians come from Ukraine and Siberian area, with many artifacts being found there, and even evidence of battles between Slavic tribes and the Scythians, which makes sense seeing as how, founder of the band and sole member, Roman Saenko famous for his other band Drudkh, is speaking of his people's past, their true origins. Even the album cover its self, depicting a traditional style drawing of two Scythian warriors accompanied by their war dogs.

This album comes as a surprise, being announced only a week before it was released, and being the first album in over 15 years for this project in particular. Its a one man band, Roman, going by simply R. on the album, plays guitars, bass, and does the vocals, while the drums being programmed drums, though you'd have a hard time realizing it as they have a more 'acoustic' sound to them compared to the band's previous releases, especially the album before this one, 'Sorrow'. The guitars have a harsher sound in this album, creating a wall of sound that is punishing to those who are unused to this type of music, creating that sense of urgency as if a horde of Scythian warriors are chasing you down on horse-back. R.'s vocals are deep and bestial, pepper this track with a hatred assault on those who oppose him. R. never releases lyrics for his music, but one can only imagine what sort of imagery is being snarled out. Along side the album was an EP, with 2 tracks that continue the theme of the album of Scythian revival. The EP, Celestial Wanderer, two tracks of epic proportions. The first track, 'The Dead talk to the Stars' continues the brutal attack, with rushing blast beats and a fierce and methodical guitar riffs decorate the track. The second, 'Goddess with Six Serpentine Legs' takes a slower pace to the rest of the releases, introducing its self with a slow, ominous, guitar riff that are then accompanied by aggressive blast beats that forces the riff to speed up in return, creating a dark, looming track of some lost ancient Scythian summoning ritual.

This is easily by far one of Hate Forest's best albums, and seeing as how he didn't need to change the sound much, R. was able to return back after a 15 year break and continue to kill it is rather impressive, and has made this album a rather large event within the Black Metal Scene.