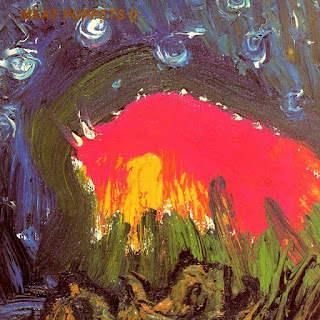 Meat Puppets, a unique band that fuses Punk-Rock, Psychedelic rock, and Country in one chaotic and vibrant amalgamation, was formed in 1980 by brothers Chris and Curt Kirkwood along side their friend and drummer, Derrick Bostrom. The band started out with a more pure punk sound with fast aggressive drums and screaming, warbling vocals from Curt, accompanied by wailing guitars, their 2nd album self-titled Meat Puppets II, on the other hand, takes a left turn and fuses that heavy country influence as well as a light shaking of psych-rock that later flooded their discography.

This album, like many punk albums, feature a long list of short 1 to 2 minute songs that feature punchy guitar rifts, country train beat all through out the album. Curt's vocals on this album range from chaotic screaming to, harsh, timid warbly vocals, that sound as if they come from a who's been lost out in the desert and is just dying for a drink of water. That's the one image I get through out this album, hot, dry, desert. Its the type of album that really takes you to the settings the artists them selves have lived through, being from Arizona, it makes sense the country and south-western influence in their style, especially on album covers. The cover for this album, created by Curt Kirkwood him self, depicts what to me looks like what a buffalo looks like during an acid trip.

There are a few songs off this album that fans of Nirvana may recognize, as Kurt performed them during Nirvana's Unplugged, with the help of Chris and Curt Kirkwood them selves, they were able to introduce them selves to a much wider audience and brought them recognition they never had before with the songs Plateau, Lake of Fire, and Oh Me. These three songs being the most personal off the album for Curt Kirkwood. Plateau, a dark coming of age song dealing with the realization of being an outsider and truly not fitting in with the status-quo. While the track Lake of Fire depicts a twisted tale of burning souls in Hell, an image the Kirkwood brothers were familiar with seeing as how he grew up in a heavily Catholic household. And finally Oh Me, a song with rather abstract lyrics, but still, I get the feeling it comes from a personal place for Curt, who wrote the lyrics.

While, I find this album to be close to a masterpiece in the punk genre, I wouldn't recommend it to just anyone, its a very weird album none the less, I can't say there's much like it out there, the Meat Puppets them selves just have this unique image you just can't shake off of them, and listening to one song makes you go, 'Oh, I know exactly what band this is.', and that's a good thing. Being distinctive in punk is rather hard, ironically enough, many bands fall into the same hardcore pattern. Fast D-beat drums with angsty screaming vocals about politics or emotions. Meat Puppets seem to get their inspiration from a more pure place within them selves. The lyrics, while strange and lot of  the times nonsensical, sometimes sharing experiences that they've gone through, or take things from different stories, such as the first track, Split my Self in Two takes inspiration from the old Rumpelstiltskin story. The more nonsensical lyrics add a layer of color and fun to this album that many sharing in the genre seem to forget about lots of the time, plus they begin to make sense if you get high enough. If you're a fan of punk music, this is a must listen, and if  you're a fan of country, but want something that's really strange and far out there for the genre I'd highly recommend giving this album a listen.