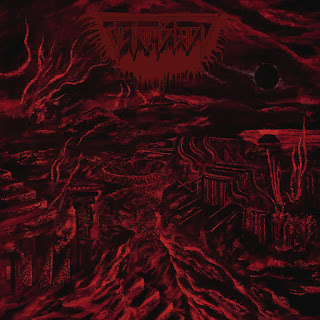 While Teitanblood may hail from Spain, their true essence comes from the burning pits of Hell. The band which formed in 2003 by guitarist and vocalist NSK, prefers to stay hidden, refusing most interviews and would rather express his true feelings through his music, and boy does it show. A rather short, yet impactful discography, the band boasts 3 hellish and chaotic albums that all stand on their own merit as something that was dug up from the deepest darkest pits.

The album I'll be discussing, their 3rd one, The Baneful Choir, which was released in 2019. While their pasts releases feature hellish guitar riffs that sound like demons wailing in the night, and demonic guttural vocals that seem to come from Satan him self accompanied with punishing drums that continue through out all their songs and never let up. This album in particular though, approaches it with a slower, methodical, and more atmospheric bent. The demonic screeches through out the album called guitar solos add an apocalyptic layer to the album, which is complimented by the cover, which encapsulates the whole message behind the album very well. With the first track, a long, distorted chanting that could've only came from a demonic cult readying their human sacrifice simply sets the stage for the rest of the album, preparing the listener as they'll be sacrifice on the altar of Teitanblood. The 2nd track, Black Vertebrae, being the soundtrack to said sacrifice. Everything else to follow turns into the chaotic fall one's own soul would take into Hell.

Unlike the previous band I talked about, Lifelover, Teitanblood's lyrics don't leave much room for wonder. They're straight forward, blasphemous rantings of a mad man. With lyrical contents diving into the occult, the darkness and evil in humanity, and of course, what black metal band is complete with out a little talk of Satan now and again? What separates this band from the rest of the genre is their lack of compromise. They don't really buy into the trendiness of it all, they don't play live, they almost never give interviews, no one even knows what NSK's face looks like besides those who've worked with him. While most black metal bands are famous for their black and white face paint, otherwise known as corpse paint, and wild theatrics on stage, like the famous black metal band Mayhem, for example, bringing pigs heads on stage and doing mock sacrifices as a way to shock the audience, its like a modern day Alice Cooper if you will, shocking on the surface, but leaving room to be desired on a deeper level. Teitanblood decides to take what they do, and push it to the next level, adding a truly authentic layer of hatred and blasphemy to their art that goes beyond the music and I'm sure plays out in the artist's daily life. NSK simply wishes to propagate his artistic vision in the only way he can, by being truly as extreme as they can with their music, and with them selves philosophically.

For the average person, this would be a rather hard album to dive into if you're not used to the black metal/death metal genre, but if one can push past the initial shock of it all, which feels like a punch to the gut when you the double bass drums first kick in, you'll be leaving with an experience unlike any other that you'll keep wanting to crawl back to as if possessed by some dark entity.