As You Stare into the Void, the Void Shouts Back 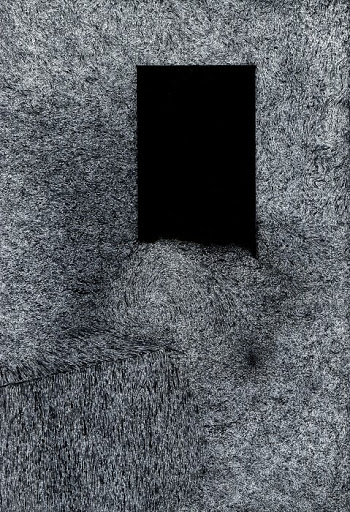 Yith, a Blackened Doom project hailing from the US provides us with their latest release, Passage. A truly frigid album, yet short album that is heavy on the atmosphere, heavy on the distortion, and just all around heavy. The third full length release here only sports six moderately length tracks, with the sixth track being an ambient piece to wrap up the whole thing in a nice little depressive way, which comes out to a total running time of 39 minutes. To me, it could've gone on for longer, its riffs are tight and on point, creating a heavily depressive album that takes all the best parts of Doom and Black Metal and combines it in a album that is extremely creative for its genre I feel. To me it feels like the most unique Black/Doom album I've come across, getting you out of the swampy murks of Doom and into the cold forests of Black Metal not straying to heavy into either and striking a firm balance between the two that walks a very fine line. But you won't find much nature here, as the cover for the album is also a fitting touch. An abstract black square in a sea of harsh static visual that mimics the tone and fury of the guitar and the massive wall of sound this album can be at times, in a good way.

The album greets you with its first track, End a cold acoustic guitar sets the mood of the album, introspective and dark. Soon, the desolate screeching of a heavily distorted guitar assaults our ears with a massive wall of sound that with the right pair of headphones can rock you to your core. Slowly, very slowly, the drums fill in the rest of the sound. What's amazing is how hypnotizing the album can be, with the sole member, known as Yith, being skilled with each instrument is not only impressive, but seems rather necessary for this type of album. It truly combines the heavy foreboding attitude of Doom, while being able to mix the cold and rather frantic style of Black Metal into a turbulent album that takes you on a storm of emotion. The second track Arisen doesn't let up on that black fury. Its first half is pure raw black metal with harsh vocals layered heavily under the pounding double bass drums and wicked guitar riffs, but soon lets out a sigh of relief and slows down, leading you into the next track Watcher.

As the album comes to a close, the song Wrath stands out the most among the album. Where, coming off from the torrential ending to the track Watcher, Wrath, seems like a short break, with a slow, cold riff that is accompanied by the beat of the drum, creating an almost funeral march sound, bringing you to the fury that is the later half of the track, again dancing around the fine line of Doom and Black Metal and being able to combine it in such a perfect way. With the band being one member, its easy to see how the vision is very narrow, not to many cooks in the kitchen to try and add their own ideas to this album. It's introspective for a reason. In my opinion I don't think you can make an album like this with a full band. You must endure the hardships your self. Cold and alone. Spending the time to master each instrument to create this artistic image of loneliness.

The album comes to a close by having you stare, or rather, listen to the Void. It's beginning is rather the most depressive riff on the album, creating a truly hopeless atmosphere that sends you down a spiral of self doubt and self disgust. But, like every storm, it comes to a pass, slowing down to the more doomy parts, with some rather, although not the fitting word, funky bass lines that seem to have finally reared its head on the Doomy parts. Finally the song ends and leads you to Gate. A fitting name for an ending track. A simple ambient piece that wishes you a mournful goodbye, and has a rather calming effect after the emotional intensity of the album.

This album gets a big recommendation from me, with some of my favorite tracks being Wrath, Void, and End.