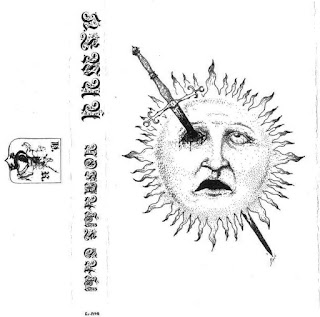 Piggybacking off my previous review, this is an example where lo-fi style of production can really shine. Леший a Russian one man black metal act hailing from Pskov, and also apart of the Pleskau Brethren, a cabal of black metal, and non metal bands that are all from the local area, bring us their latest release, a twenty-one minute assault of pure raw black metal.

Just starting out, the first track is a hellish assault, with thunderous riffs that, thanks to the production style creates a chugging like effect, complimented by the harsh growls from the vocals, and the bony sound of the snare and bass drum, and the spine chilling rattles of the cymbals really tie in the sound of the album. There are some very memorable riffs through out the album as well, for example the ending half of the third track, a simple yet effect riff that gets stuck in your head like a bad dream.

What I also really enjoy about this album is how cut throat it is. Its simplicity helps and compliments the ferocious and viscous attitude this release has. But one part that stood out to me was on the second track, about at the half way mark, the ferocious blast beats and strumming slow down and a lone acoustic guitar greets us. Playing a beautiful melody and is then joined by the drums creating a rather triumphant sound, and soon at the crescendo the electric guitars kick in mimicking the acoustic guitar and creates a somber and mournful lament. Another amazing riff was on the third track, its a simple tremolo, black metal style picking, that then builds up into this war metal-esque solo of just wailing on the guitar, Caller of the Storm style.

This release also doesn't over stay its welcome. It's run time is only 28 minutes and it gets its point across very effectively, cutting straight to the throat on each song, delivering cold and unrelenting music that is a perfect example of an amazing raw black metal album and all of its ugly glory.