Lost Media from the Future 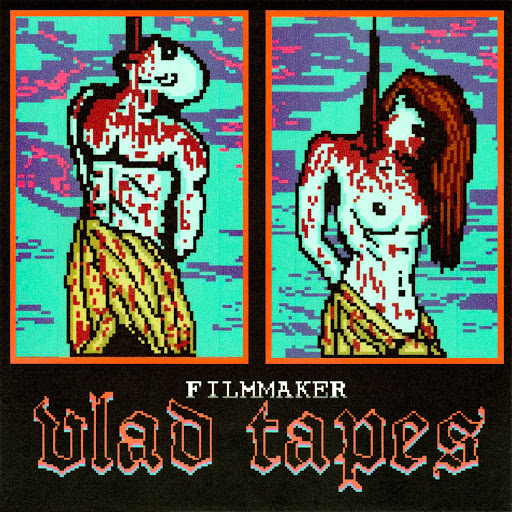 First release on BODY MUSICK, a new online collection of hardcore techno brought to us by the legendary Filmmaker, brings us their longest release to date, Vlad Tapes, an hour and thirty-one minute impaling session brought to us by the legendary Vlad the Impaler. It's a fast, fun, beat driven album with bit crushed production style that sorta reminds me of old school NES or SNES games, except of course being haunted by the spirit of Vlad him self, creating a dark atmosphere that can create a sense of urgency or anxiety at times.

Each track is filled with trippy sound collages mixed in a sorta muddy way that creates a sense of claustrophobia that only adds to the horror of the album, making you feel packed in a tight club, with the bass rattling your bones to the core. Its like as if Vlad him self opened up his castle to become a rave at night, or if Castlevania's soundtrack was made for a modern audience, but still using the old NES sound chip. It's a very addicting album too, once you start its very hard to stop, the beat just keeps on driving you back for more, waiting for the next torture session be it being bled dry on the second track SIDE BATHORY, or the harsh and overbearing feeling of being watched like on SIDE COUNT ORLOCK, with those two tracks being my favorite off the album.

The imagery on the album is awesome as well, and real unique. Giving off that old school retro video game feel like I've mentioned before, but being able to give it a rather dark edge that you rarely see with this sorta style. Most of the time, people cash in on the nostalgia factor when creating that retro 16-bit look, just creating stuff to mimic the sound of old-school video games and moving on from there. But no, Filmmaker takes it to the next level. That retro aesthetic would be the only fitting way to portray this kind of music. You can't just slap some professionally done photograph of the DJ and move on, or some silly color design, no sir. This album is like discovering some long lost forgotten piece of media way in the future, uncovering it in some old techno-dungeon like an archaeologist discovering the lost archives of a long lost civilization or culture.

If many years into the future, there was one album people remembered Vlad and his empire by, this one should be it. Hands down a major recommendation for anyone into techno or electronic music in general.

DON'T FORGET TO SUPPORT THE ARTIST HERE AT THEIR BANDCAMP