Surviving in the Underground 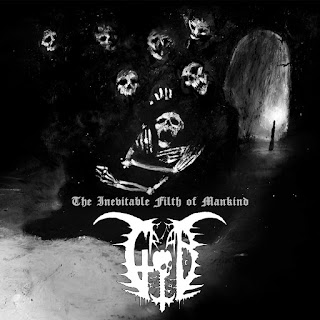 Black metal has always been known for its Nordic heritage. Many of the greatest bands have hailed from Scandinavia, but if there is one scene that is fast on the rise in the modern age, it'd be the Greek black metal scene. While, I may not be there to witness it first hand, what black and vile hatred that's been spewing out of the Hellenic world is nothing but a continuation and solidifying the nihilistic and hostile nature that black metal is. So this brings us to Grab, a band that keeps the tradition of the old school second wave of black metal alive with their second full length The Inevitable Filth of Mankind.

This album is fantastic, from the instrumentation to the production style, and just the all around nihilistic vitriol this album produces is just outstanding. The band kills it on all fronts with Goatlord on bass, creating awesome bass riffs that is rather uncommonly heard in black metal, but adds a fierce harshness like on the third track A Hollow Figure from the Past, which takes up a good portion of the album running eight and a half minutes long. In that track he provides these amazing melodic riffs that are both dark and melancholic, that just compliment the anger behind the drums and guitar.

The vocals are also killer, bringing in mind early Darkthrone, especially at the very beginning of the album. Which, mind you, isn't a bad thing at all. Even the style of recording is very old school, with a very raw approach, Stripped back guitars that have a raw distortion to them, a muted bass with heavy treble, and raw organic sounding drums, with the vocals sitting nicely on top of everything, not taking up too much of your attention but still draws a clear dominance. It's simplicity at its finest.


As I've mentioned before, the instrumentation of this album is very tight, clearly these guys are skilled with their instruments. This isn't your everyday bedroom black metal band, no sir. I've already mentioned the bass before, but the drums are simple, yet effective. They're not hyper fast like some bands, but it delivers the speed when its time. As well as the slower more ferocious parts, N.D. who works the drums just slams down on them with all the rage and might behind him. And Bacchus on guitars, provide solid simplistic riffs that are seeping with hatred and at times can almost be kinda groovy, which isn't very 'black metal' but bare with me here. On fourth track, Altar of Revenge, he plays along side the bass to create an easy headbanging riff that is just so infectious, it takes over you. You can't help but nod your head along to the song.

Honestly, this is a really good album, an easy milestone in the Hellenic black metal scene, and a fantastic listen for those who are interested.