ARNA — Dragged to a Lunar Grave 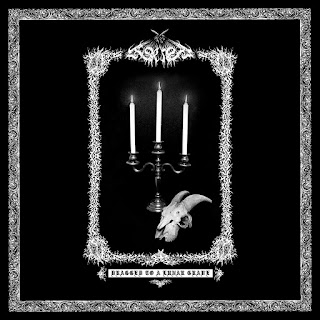 This is a debut coming from the Catalan duo ARNA, and a powerful first release as well. Coming in strong with its modern day and quality production, yet still keeping a raw and unfiltered sound. Impressive and atmospheric guitar riffs along side dark and beautiful lyrics that tell wicked tales.

The instrumentation is very tight and skillful. Taking its roots in the modern age of black metal for sure. It reminds me at times of bands like Mgla, Uada, and other modern black metal bands. They have a very clean sound yet still staying true to tradition and keeping it raw. But the programmed drums, while blend in well and create a cold atmosphere, sometimes feel a bit too artificial. Especially on the third track Dolmen, during the blast beats the ride cymbal is just so grating to the ear. It really takes you out and distracts you from the imagery of the album. There's something to say about an authentic drum kit, and how much more vibrancy it can add to an album, even if you're aiming it to be cold and harsh. Of course the drums that they did program though, are good and there are some creative parts that really add to the ferociousness of the sound. The guitars are where they shine the most besides the vocals in my opinion. Creative melancholic riffs that don't get tiring, since each of the four tracks are rather long. Typical you'd end up gassing out, but not with these riffs. They're able to change it and keep it different enough where you won't fall asleep or get tired of the same drilling sound over and over.

The vocals are also an impressive piece as well. Deep and guttural, creating a bestial sound that leaves the blood cold. And it helps that the lyrics are well written. Each song is a story being told, one of revenge and death, others of sadness and self mourning. They paint creative and beautiful pictures that get you immersed in the music in totally different way. When combined with the vocals they're able to emphasize the rather important parts of the story told, adding emotion and raw aggression at times. It really makes me wish this album ran longer, only coming to just under twenty nine minutes, it leaves you craving for more. The song structures are fantastic as well, the way the instruments shape around the vocals make it blend together so well. Adding onto the immersion the lyrics already provide. A sound track to the stories.

All in all this album is a must listen and one of the better ones I've heard this year as well. Totally impressed by this release and highly looking forward for more to come.