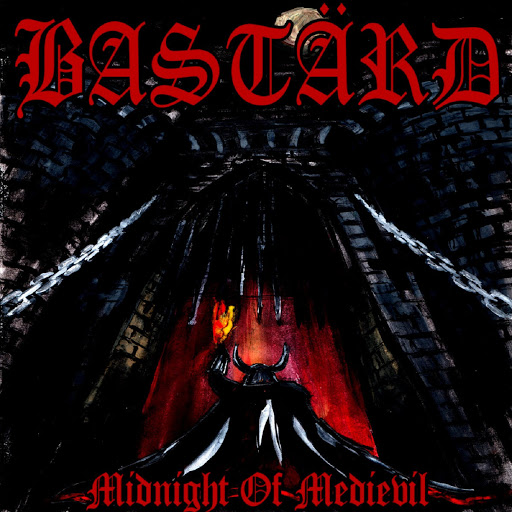 Hailing from the cold wastes of Siberia comes the band Bastärd, erecting a hellish monument to those of the black metal past. Taking major influences from bands like Bathory and Venom, this album provides an old school first-wave black metal sound of grimy thrash riffs, demonic Venom style vocals, and a primitive d-beat that completes the apocalyptic message. Even with the ancestral worship this album provides, there's still a sense of originality that really takes this album to the next level and makes it stand out to more contemporary black metal bands.

To start off with, there's a thick sense of atmosphere on this album, with ambient synth parts in the intro and through out the album, creating a sense of dark foreboding, with even the album cover adding to that layer of atmosphere. A demonic knight standing at the gate of a haunted keep, ready to step forth and face the demons within. Those demons, being the band members, with their wailing guitar solos that have that old school flair, and harsh vocals that takes one back to Bathory's first album. Speaking off, there are many points in the album where I thought my playlist had switched to Bathory,with the third track Funeral Night being a perfect example of their influence. The riff on that song made me think it was straight lifted from Necromansy, but I was clearly wrong, and impressed really that they were able to capture that same dark attitude from such a legendary band.

There are plenty of really fun moments on this album, from guitar solos like on the tracks Witchcraft, Black Mass Orgy, and Castle In Mountains, with the latter having a really cool slow part that gives a very medieval, dark classical theme to it, creating a really vivid mental image of a lone keep in a dark storm, then of course being slaughtered by ravenous blast beats and hellish tremolo-picked riffs that come straight from the modern era. Another really memorable part of t
he album are the vocals on the track Hellsword, an eight minute ballad of demonic pleasure, where Xardas vocalist and guitarist, provides us with his greatest old school speed metal operatic scream, and boy does it stick out on this album compared to the rest of it. It really through me in for a loop but was pleasantly surprised by it as it was accompanied by an awesome guitar solo that sounds like it came straight from a demonic soul.

Honestly this album is a true modern classic, a perfect blend of the old and new creating a very unique and fun experience that stands out among the sea of black and white corpse paint with its leather and chain style that evokes emotions of the past. Highly recommend for any fan of black metal, or speed and thrash heads out there!