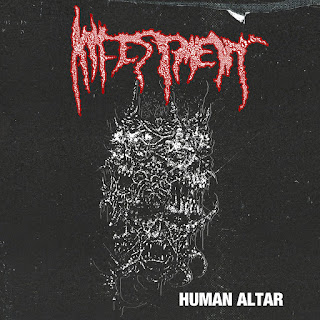 I love me some death metal, don't get me wrong. Old school death metal like Death, Morbid Angel, Bolt Thrower, Possessed, among many others. But there's just one type of death metal that I just never really clicked with. Its that early Cannibal Corpse style, half grindcore half not style of death metal that I just always never clicked with. And this EP right here, Human Altar, provided by us by the band Infestment, an Atlanta, Georgia born death metal act that took pretty much everything from early Cannibal Corpse and put it into one condensed piece of audio filth (in a good way.).

While listening you'll be white knuckling it through the whole way. Its harsh and extremely heavy tone just drill into your ear with the messy guitar and playing and a drum set that literally just sounds like an incredibly heavy floor tom and a double bass. Oh what's that hissing in the background you say? They got a snake to do backing vocals? No, that's supposedly the ride. Its non-existent in the super duper bass heavy mixing this EP has. Speaking of the vocals, it can't get any heavier than this. I know that in death metal, to get that deeper sound its good to wrap your hands around the microphone as you scream into it, creating a more muffled and deeper scream. But it sounds like instead of his hands he just sorta used a thick blanket around the microphone and proceeded to get a dying thousand pound pig to do some deep growls.

Now, it may sound like I don't really like this EP, don't get me wrong I do. Its very fun, really kick ass riffs and I love how heavy the bass is as someone who plays bass my self. I just find it incredibly goofy. But in a good way if that makes sense? I just can't help but laugh at the incredibly stereotypical death metal names for the tracks, or just how much of a stand out the vocals are compared to other bands cut from the same cloth.

One could say they have a lot of room to improve, and I'm inclined to think so as well, but why would they? There's no need for them to make something all clean and hyper technical. That's not them. Infestment is clearly making their mark creating grimey, dirty, heavy death metal that isn't supposed to be pretty. And I respect the hell out of that. This shit is supposed to make you turn away in disgust or leave you confused and wondering what you just heard was real or not. Its everything death metal was originally supposed to be, just like back in the old tape trading days, where people didn't care about how high fidelity your album was. Only if it made you want to crush and kill fucking everything around you.

Would I suggest this album? Only if you want to ram a head into a wall over and over again. Its fucking killer give it a shot.