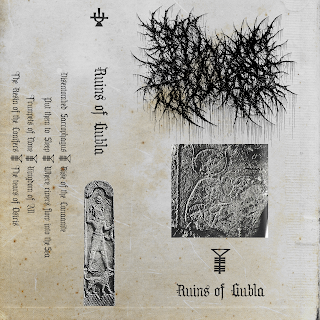 Uncovered in an ancient tomb in the city of Byblos, in Lebanon, this demo tape created by the band known as θoʊθ, pronounced THOTH, is an artifact of the past. Recreating the sound of overly reproduced tapes from the early 90's death metal tape trading days, this demo is an ode to the past when those couldn't afford, or have need for some high fidelity sound system.

To begin with the imagery of the demo is highly mysterious, an ancient Greek name with ancient Babylonian symbols and carvings all across the cover, it creates a wonderful head space, getting you immersed in the idea that what you're hearing was created by the ancients. A truly heavy and deafening sound with slow marches of death to the torrential beating of the drums. The bass is heavy on this one, so heavy in fact it distorts the sound when combined with the blast beats, creating a truly terrifying and immense sound.

Just from the opening track, the dismal drone the guitar makes already creates a thick atmosphere, preparing you for what ever underworldly and ancient rituals are about to unfold before you. There are a lot of groovy doom riffs through out the album as well, the opening track being such an example, accompanied with the deep and unholy vocals that truly oppress the listeners in the best way possible. Another one of my favorite tracks is the third track, where its the first time we hear a clean drum beat, that's accompanied by a riff that's very mystical sounding. Like wandering through a desert. It's just a great doom metal style track that gets incredibly heavy and dark towards the in as the bass guitar comes in.

The intensity of the recording is what gets me. The chaotic parts where the blast beats happen are just such a physically moving vibration. With the right sound set up this demo can truly move some walls. Especially the heavy riffs, while simple they're incredibly effective, repeating patterns that get stuck in your head like a catchy song. This band has truly uncovered some ancient rites that will stand the test of time. Highly looking forward to a full release from them.