Riding Through the Cosmic Void 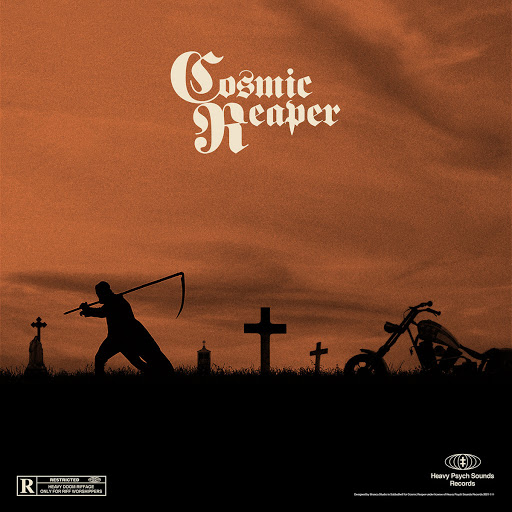 Hailing from Charlotte, North Carolina, come 'Cosmic Reaper', delivering us their first devastatingly powerful self titled full length album. With slow and heavy riffs with a thick fuzz that vibrates so heavy you can see it in the air. Immediately on starting the album, you're greeted by the heavy fuzz of the bass, like a motorcycle engine revving up to take you on this heavy journey. And a journey it certainly is, taking you from 70s inspired psych-rock like on the third track, 'Stellar Death'. The fourth track 'Wasteland I', is a killer instrumental section, dripping with psychedelic atmosphere and that colossal feeling you get from doom all mixed into one amazing solo, only being followed by 'Wasteland II' another psych-rock inspired ballad dripping with sludgy atmosphere thanks again to that fuzz.

Another thing that's great about this album is how it doesn't beat around the bush trying to overly show off. These guys are skilled at what they do and the groove they create together is impeccable, creating a sound that is distinct enough to stand out, yet keeping that text-book stoner doom sound and doing it justice, creating a modern day classic. The riffs are incredibly catchy, getting stuck in your head as they hypnotically repeat over and over in the song. You just can't get tired of it. The vocals are also an amazing touch, creating a ghastly atmosphere that adds to the retro 70s horror movie theme to it all. Even the album is a parody of old 70s horror films, with this album easily being a soundtrack to one of those.

Easily one of the best songs off the album is the nine minute epic known as Planet Eater which greets you with a bass so heavy it could move mountains, and as the wailing of the guitars come alive and the drums being their march, it creates this amazingly eerie atmosphere that only picks up from there. The vocals don't even kick in till about half way through the song, only giving you a brief moment of rest as the ghostly voice only draws you in deeper, like a siren pulling a ship ashore to crash in much like the drums crashing in to break that moment of brief respite.

For their first album this is truly a monumental moment, nailing the classic sound while still keeping it fresh and adding their own flavor to the genre. Highly recommend those who are slaves to the old-school fuzz rock sound. Can't go wrong with it.