Людоед — Death Of The Modern World 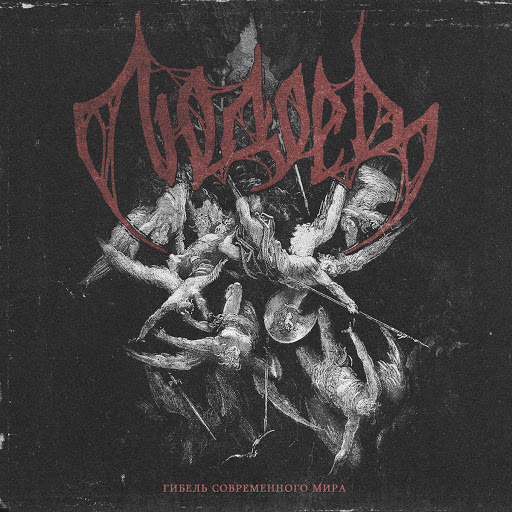 Hailing from a small provincial town in Russia, Людоед, or Ogre in English, brings us their latest blacken punk attack, Death of the Modern World. Its another genre fusion album, combining the likes of hardcore punk and black metal into one mosh worthy album. Its not often that a combo like this actually appeals to me. Typically I like my black metal punk fusion albums to have that lo-fi almost crust punk feel, but these guys approach it with a very clean production. Or clean enough for black metal. They fuse killer tremolo picked riffs that sound as cold as where they hail from, and of course the iconic blast beats. But its not all fast picking and fast kicking. There's plenty of mid-tempo change ups and other iconic punky sounds like d-beats and even some slick punk style riffs.

I just love how fun this album is. Unlike lots of black metal, where the sound of the music really doesn't make you move as much as other forms of hardcore or heavy styles of music, this, having its footing deep in the punk sound, really gets the mosh moving. While listening I just couldn't help but move my body around, only wishing I could slam into others to emulate the pure rage the music releases.

I also love just how viscous the vocals are. Much like hardcore punk, the vocals are harsh and yelled out, but its prominent and not left behind and forgotten. Blending in well with the instrumentation and just adding another layer of aggression to the music that really out preforms other bands of similar sound.

There was one bit on the album that stood out to me that made it unique and albeit kinda funny. The sixth track, Power of Endless Nights, is a perfect example of a unique mixture of both punk and black metal. From the drums switching from a furious double kick to a punky d-beat in less than a second is whats impressive to me. That and the kind of out of place opera vocals that do totally give off a 'trve kvlt' vibe and cements that atmospheric black metal bit.

Honestly the guitars were kind of forgettable for the most part. Really blending in the background with simple yet effective and catchy riffs that are very much in vein of black metal. Except on the seventh track, Under The Cold Ground, which threw me in for a loop when there was all of a sudden a really cool but short heavy metal style guitar solo. It was really cool and stood out just like the last track and the opera vocals. While it was a little out of place, it really added to the uniqueness of the album and the fun they clearly had while making it as well.

Really makes me want to listen to more of this band. Always impressed with things coming out of Russia and other Slavic states. A big recommendation to those who enjoy both punk and black metal.