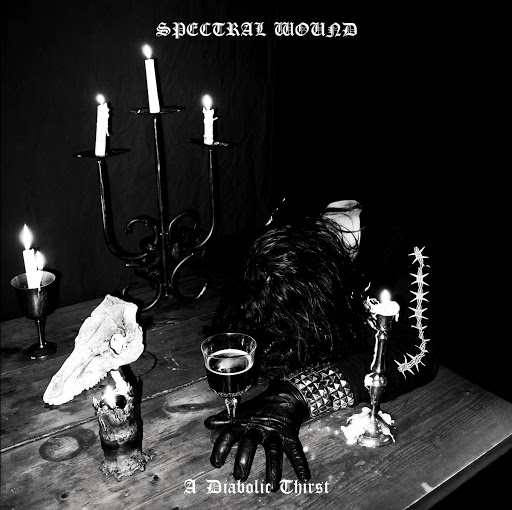 Taking a page out of the second-wave text book, Canadian born Spectral Wound releases their latest full length album, A Diabloic Thirst. This being their third album, its clear sign they're no strangers to the black metal sound, having a very vibrant sound that's energetic and rather fresh despite it using the old style of the 90s black metal bands. Its a great modern take on it.

Starting out with the first track, Imperial Saison Noire, that these guys are not playing around. Jumping head first into the blast beats and chaotic riffs, but changing through out the song and album, becoming much more melodic and creating killer transitions between parts. There's really no bull shitting with these guys, they're here to deliver black metal and they're not gonna play.

The production is also fantastic. A crisp sounding guitar with cold ferocity, and drums that remind me of old school Horna or Sargeist, definitely taking influence from the Finnish page in black metal, seeing as how there are more 'groovy' parts that are reminiscent of the Finnish bands. But then of course kicking right back into the fast chaos and blasphemous vocals, which are mixed in quite well, not getting lost in the background noise, but being a clear sharp and distinct sound that attacks you straight down the middle.

All in all this is your standard black metal fair. Cold riffs, endless blast beats and blasphemous vocals that'll make anyone bust out their corpse paint and start posing in the woods. Not saying its bad, because it does it very well, giving it a fresh layer of corpse paint on the already massive genre. But, its nothing too impressive. Definitely give it a check out if you're more into the traditional TRVE KVLT style black metal. This is just for you.