THE DRIN – Engines Sing for the Pale Moon 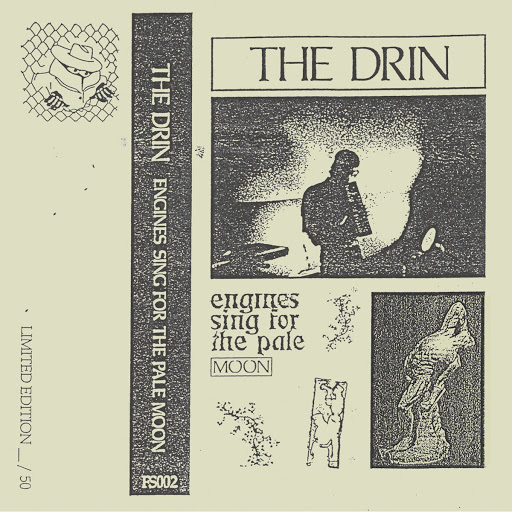 Being released on the Cincinnati based record label Future Shock, The Drin releases their first project titled Engines Sing for the Pale Moon. An experimental album that drips with the many influences of the past and creates a very unique listening experience. Right off the bat you're greeted with a punky drum beat and a dark, mysterious sounding bass riff. It almost sounds like some long forgotten Joy Division song. But it doesn't just stop there, the album exploits many different effects and production techniques to create swirling psychedelic sounds and hypnotic pulses that get you hooked onto the rhythm of the album. Almost reminding me of those very heavy reggae dub artists, even having a similar effect on the vocals you'd find on many of those artists like Augustus Pablo or King Tubby.

The instrumentation is very tight through out the album. Everything performed on the album, from the dark and heavy bass lines to the tight, punk style drum beats are all performed excellently. Almost having a rather nostalgic effect for older post-punk bands. They even experiment with different instruments on the album. From what I could pick out, there's a melodica, which is also featured on the cover, plenty of keyboards and swirling synth noises. What's cool too is how there's very limited use of guitars, unless I'm mistaken and its been heavily edited, all I could really hear are a couple of tracks with acoustic guitar thrown in to give it that Smiths vibe, especially when paired with the drums.

My favorite track from the album is probably the last track, The Creek at Sundown. A simple and melancholic song that is thick with atmosphere, featuring the vocalist singing in a rather monotone yet hypnotic way as an acoustic guitar plucks the same rhythm over and over really honing in on that hypnotic vibe. What more is the awesome synth noises in the background that create a wonderful layer of texture to the sound and really fills in the empty space.

Speaking of space, its a very easy album to space out too, truly experimenting with what makes an album 'post-punk' or what ever silly label you'd want to attach to it, cause in the end, its just killer music. You can sit there forever picking out all the little sounds and techniques that influenced the album, but I feel like that really takes away from the fantastic creativity this band has. An album like this would truly stand the test of time. Where it sounds both modern, yet old. If you'd slap a label on it saying it was from 1985 I'd believe you. If you'd also slap a label on it with 2021 I'd also believe you. An album that can achieve that is worth remembering and worth noting. Highly recommend for everyone to check out. You'll find something in it that you'll like.

Email ThisBlogThis!Share to TwitterShare to FacebookShare to Pinterest
Labels: 2021, Experimental, post-punk, The Drin