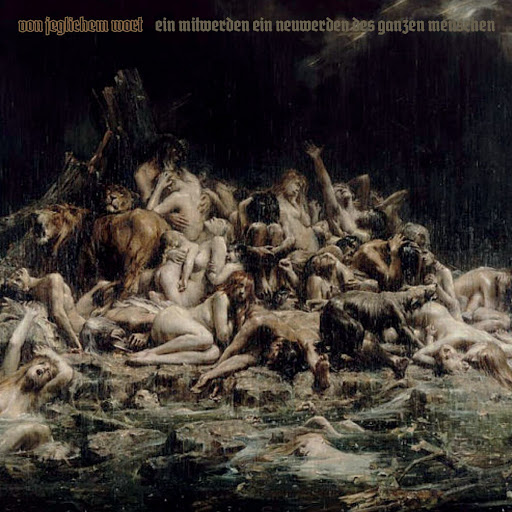 Hailing from Berlin, the band Von Jeglichem Wort Das Durch Den Mund Den Menschen Vernewet, or Von Jeglichem Wort for short are a self proclaimed black ambient metal act, an its a fitting title. With their latest release, ein mitweden ein neuweden des ganzen menschen, a thirty minute piece of self reflection and beautiful white noise, creating a dark and oppressive atmosphere and has a rather melancholic vibe to the tracks, but not overly depressing.

The music its self is rather straight forward. Musical soundscapes created from synths and the heavy roar of guitars, creating a wall of sound that vibrates one to their core. It reminds me of bands such as Sun O))), early Earth, or other such drone/doom bands who create music that's more on the side of pure ambiance than not. For those who're more used to traditional black metal you won't find any here, even though the influence is for sure there. Just the guitar tone alone sounds like it could be the wall of sound that's always melded in the background of plenty of black metal songs, throw in some drums to these tracks and you got your self 'atmospheric black metal'. But that's not what they're doing here. Going out of their way to create something that invokes thoughts of introspection.

There is progression to these songs as well, each track has its own build up and climax that then slowly fade into the next song. Creating transitions that make it feel like you're caught in the ocean, letting the tide drag you down to the dark depths below the surface. Suffocating you with its loud guitar screeches and heavy droning synths that act as the foundation of all these tracks. My favorite being the third track, where for the first half the song is rather calm, quiet. But in the distance you hear the rumbling guitar grow louder and louder until, like a lion, lets out a magnificent roar that creates a crescendo of white noise and drags you into the murky waters below.

This album really is something else, and really scratches the niche of music that I love. Atmospheric noise with beautiful and ghostly production style. A true diamond in the rough. Highly suggested for those who enjoy dark and atmospheric ambient music.