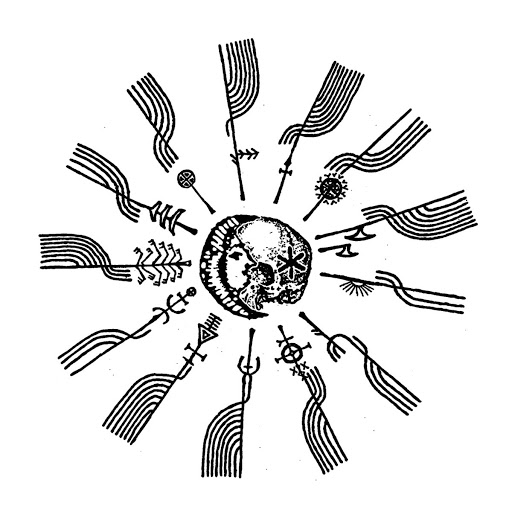 Hailing from the Swedish underground black metal scene, Wagner Ödegård, is legendary for his signature raw and lo-fi sound from his bands Tomhet and Wulkanaz. In the past, he's released multiple albums under his own name in the past, though mainly sticking with the more ambient style. As of recently, he's dipped his toes back into the harsh sound of his past that he helped paved the way for.

This latest release, Om Kosmos och de Tolv Järtek, is a visceral and raw album that takes you back to his past release. Punk riffs with a very metallic and chunky sound, and endless double bass with a drum sound that I can only describe as boney. His snare must be a skull or something, it just has this hollow sound that adds this twisted and demented atmosphere to it all, only complimented by the twisted and manic guitar riffs. And the vocals have kept that same raw undead sound that is just the cherry on top of this anxiety sounding album. That's a great way of describing the emotion behind this album. Anxious. Like something invisible force creeping up behind you, making you run away from something that isn't even there. And I believe that its thanks to his deep spiritual and pagan imagery. Using deeply esoteric runes and symbols that have its roots deeply set within Germanic Paganism, but approaching it from a Gnostic Satanism angle. Something unique like this only adds to the atmosphere and thanks to how seriously he takes it, especially from his Wulkanaz releases, even go as far as writing much of the lyrics and titles in a proto-germanic language.

There's some experimentation on the later half of the album as well, taking hints of his past ambient works and mixing it in with that raw black metal style. For example songs like Falke,with its abrupt dark ambient part in the middle of the track only to flow back into the harsh drums and guitar. Or Ingalunda, with its spooky, horror themed synths that mix in with the distorted guitar that reminds me of some sort of weird extreme version of The Misfits. But it works really well. The rest of the tracks either have samples from different recordings or his own synth work that add to the unique vibe this album gives off. But the biggest departure was the last track, a slowed down, psyched out stoner rock song. Complete with fuzzy, wobbly guitar effects and a slow steady drum beat. It just has this vibe of getting stoned in a haunted mansion, and you're fucking terrified. I dunno its just great.

This album is easily one of Wagner's best and tightest release yet. Its everything you expect, plus more. Taking a unique experimental stint with the synth works and horror punk sorta style. All in all its just great.