Typically this type of metal doesn't really interest me. I always find bands who go for the symphonic approach to be a bit over the top and really phone in the theatrics up a bit too much for my liking. Now, black metal does have its fare share of theatrics, Gorgoroth's live shows are a good example of such things. But it stops mainly on the surface. The music is still a very harsh and hard hitting as any other black metal. But, Osiris, taking after such bands like Emperor, Nile, and other such bands that break out the synths, turn on the strings mode, and back up the guitars. 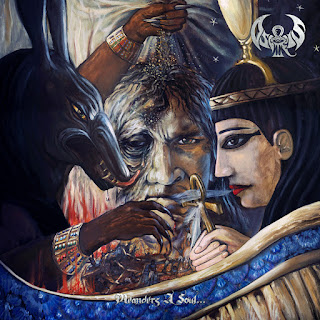 Now, since Osiris is of Egyptian origin, its only fitting that the music thematically matches their traditional roots. Having really cool and epic middle-eastern sounding guitar pieces, that are supported by the strings, super tight and fast drumming, and a really cool guttural screams for the vocals. The album as a whole is just really well produced, sounding very clean and slick, and adding onto the whole epic atmosphere that it builds. Even the synths that play the symphonic parts fit in really well with the much heavier parts.

Its a very progressive album as well, definitely taking more influence from more prog style black metal and death metal acts, especially when it comes to the slower and more symphonic parts of the album. The guitar work is really neat, almost methodically so. Personally, I've always liked a bit more of a sloppy and enthusiastic solo, but if you prefer the cleaner and much more well produced approach you'll find plenty of it in here. Tracks like Faceless Men, Forgotten Stone of Time, Our Essence, and others take a page from the prog/technical death metal text book and lay down some very finely crafted solos.

Coming from their original demo work, this is almost night and day. Meanders A Soul, being the day, since their image of what they truly wanted has come to light. And listening you can truly tell they put care and passion into what they've released. While, I may not be the biggest fan of this type of sound, I can say that for others would enjoy this greatly. An epic, dark, and sometimes mournful adventure truly awaits those who listen.

Akhenaten – The Emeral Tablets of Thoth

US based symphonic death metal band Akhenaten releases their fourth full length album, The Emerald Tablets of Thoth. Now, as I've previously said, symphonic metal is not my thing. But, these guys do it differently I think. There's a much more grounded and heavier approach to their sound compared to others of the genre, still keeping to their death metal roots, especially when it comes to vocals and instrumentation. 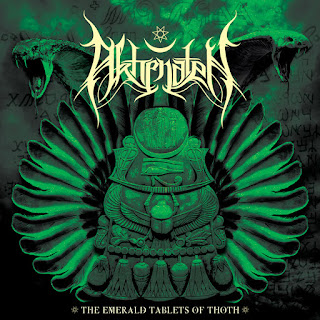 Speaking of instrumentation, they use a wide variety of different instruments from all across the east as well as the typical guitar, drums, bass you'd find in any metal band. They implement string instruments, flutes and hand drums, and other such folk like instruments to really add to that nice layer of dusty Egyptian mythological atmosphere. They touch upon the topics of the lost esoteric knowledge of the Hermetic Emerald Tablets, an ancient tablet which held the knowledge of Thoth the Atlantean. Much of the album lyrically, would be related around that and the music fits very well with the theme, breaking down into the dark and mysterious folk instruments and mixing it in with the intense death metal instrumentation really adds for a very fun and creative time.

The album is very long as well, but with how each song progressive and grows on its own little journey, you can easily lose track of time and get absorbed into the music. One of the songs that I got lost in was the seventh track The Black Land, an eight minute opus that takes you on a journey through the desert. Starting you out with string instruments and synths creating a thick layer of atmosphere as the hand drums kick in to hurry you along its way into the very oriental style guitar playing. Its a very fun song that you can't help but nod your head to.

All in all I don't think I'll be sticking around the symphonic parts of black or death metal, but it was a very fun and interesting little dive into two albums of the genre. And when listened to Osiris' Meanders A Soul back to back it really creates a very unique musical journey that is connected yet vastly different. Personally, I prefer Akhenaten, but they're both good albums and I recommend giving them both a shot.