Chaos Over Cosmos - The Ultimate Multiverse 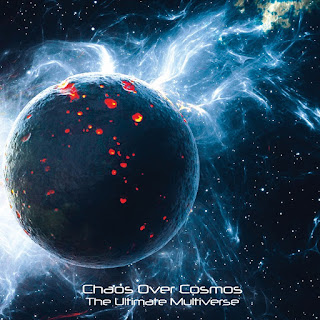 Chaos Over Cosmos is a very unique band with an approach I don't think I've ever really heard before. Only being a two man band, the two members live on different sides of the planet. Hailing from Poland we have Rafal Bowman and Joshua Ratcliff from Australia. They've found a way to come together on their second full length album The Ultimate Multiverse, to create a fun and interesting progressive metal band. Now typically, this type of sound isn't my thing, but this album caught my attention especially with its fusions of different genres. Mixing elements of electronic with atmospheric synths, power metal with its triumphant guitar solos, and even death metal with the harsh growled vocals.

First, lets get the good out of the way. The production is fantastic. Super clean, great mixing, and fantastic guitar work. There's no kidding around when it comes to the shredding Bowman does, it can really throw your head in for a loop, especially if you're going in blind like my self. Each track was a different turn for me, each one of them different from the other. It certainly won't leave you bored by any means. What's also a nice added bonus are the synths and how they layer them into the music. At first I was expecting this to be filled with synths from top to bottom, but to my surprise they were used in a fantastic way, layering it into the background to create a great compliment on the guitars, adding onto the heavy space-like sci-fi atmosphere this album has. My favorite track is the djent-like third track Worlds Apart, with a heavy opening with its djent break down that then transitions into a head spinning shredding solo. What's also great is the atmosphere this whole album builds. Its incredibly fun there's a great sense of triumph in the solos, like you're over coming some sorta obstacle or defeating some sorta evil outer space alien. It really lets the imagination run wild.

Now, moving onto the things I didn't like so much about the album. Starting out, the vocals are okay. The death metal growls are kind of an out of place addition. The clean and spacey production doesn't really mix well with the harsh and brutal sound of the growls. But, on the other hand, the cleaner parts were great, the album could've done a lot better with more of the cleaner parts in my opinion. Another thing is that I feel like the album is a little bit unfocused. While I do like the diversity in sound, it can also be a little bit overwhelming and can take back on the whole structure of an album. Personally, I've always enjoyed albums that had a running theme to it, and that theme being translated into the music. Be it a repeating riff, or a certain tonal style on the instruments, its good in my opinion to have a sort of theme to come back to. If not it sorta turns into a weird organized mess on the ears. While on one hand the instrumentation is great, making focusing on a fusion of one or two genres can go a long way.

But all in all this is a very solid album, not my usual style of metal, but hey if you're into more up-beat, lighter metal with progressive tendencies and amazing guitar work, then this band and this album is for you.