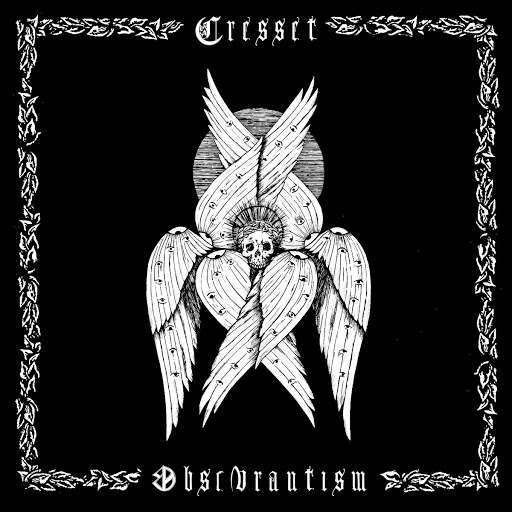 Hailing from Slovakia, Cresset presents us with their debut full length album Obscurantism. There's a dark intensity with this album. After giving it many listens I can say this is a stunning first album for this band. Heavy, dark, and esoteric, it touches all the niches it needs while staying fresh and fusing different styles together to create one masterful piece.

The first thing you'd notice is how deep and bassy the album is. From the vocals to how prominent the bass guitar and drum are, its just a booming and impressive sound it has. But it gets better, the guitar work, while deep as well, are frantic and chaotic, creating hypnotic riffs that capture the listener.

The production is very raw, almost as if each one of the instruments were possibly recorded live in one go. There's just something very present about their performances. Especially the vocals. I'm not expert, but it sounds like the vocalist is straining to yell over the instruments. It creates a very intense and angry performance that gives it that death metal feel to the album as well.

Its subtle but through out the album are synths that add a layer to the wall of sound, but sometimes making an appearance, like on the fifth track, Reliquary, where it adds a nice atmospheric touch to the slower break down on the riff and transitioning very well into the following track, where again, the keyboards make a more prominent appearance toward the middle of the song. Its a nice little touch that helps fill out the sound.

This is probably one of the best albums I've heard in a while. The production is both raw and high quality, presenting deeply esoteric and gnostic imagery that captures the imagination and draws you into its dark abyss. Highly recommend this one for sure.