This one is going to hit or miss for a lot of people who decide to check this out. 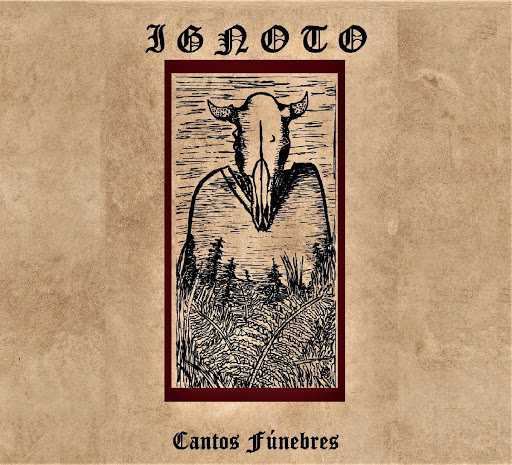 Ignoto, hailing from Chile, have presented us with their first full length album. Cantos Fúnebres is a strange, strange album, with harsh lo-fi production, amateur riffs filled with fury, and introspective and beautiful folk guitar parts. Its a very unique album with lots of attitude and emotion, and really charmed me.

First off don't expect to be blown away with how beautiful the album is. Its not that pretty in terms of audio quality and production, but that lo-fi style really brings out the atmosphere and the emotion behind it. Just pure anger and sadness thrown out there as best as possible, and shown to the world in its own little way. Now you can call this black metal, but don't be surprised if you're sitting through acoustic guitar pieces. There are plenty of it to be found on the album. Inter weaving its self into the harder and heavier electric parts. And the vocals are psychotic. At first they kinda make you chuckle, but when you really let it take over you, sounds almost demonic. Like an imp is making its music.

The strangest track is the fourth album, being the longest on the album running at six minutes and forty-six seconds, its almost structured like a bunch of smaller songs put into one. The first part being a slow and melodic funeral march, then quickly transitioning into a furious black metal song with blast beats for that extra kvlt touch, then turning into a strange almost Spanish like neo-folk song with hellish vocals slurring and growling on top of the up beat surf style drums and jingly guitar tone strumming in the background. After that another change, and then into yet another. Its a trip in and of its self and kind of impressive he was able to create something so captivating and all of it still having the same sort of melancholic and mournful emotion.

Now I already know there are going to be people who may not like this album that much. Be it the production style, the very amateur and unimpressive instrumentation to the just strange song writing. But if you really can look past it and not take it for its face value, but try to get that under lying emotion under it and let the mind sorta wander with the music as it leads you into dark paths, its gonna be a very memorable listening experience. Its that sense of independence that this album captures that drew me into black metal in the first place. Taking pride in not that fact that its a pretty album and you're reaching top charts. But you're able to truly express your inner most feelings through an audible format. And those who get it will be drawn to it, while others repelled away. But who'd want those people in the first place am I right?