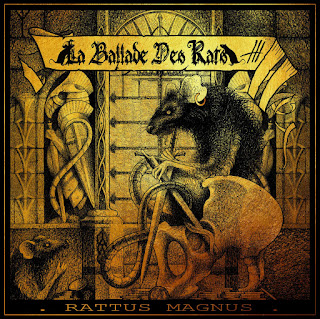 There are a couple of folk style songs on t his album, the first one greets you on the first track, Impedimentum, a four and a half minute acoustic folk introduction that sets the mood and atmosphere of this album. Dark, diseased, and very raw. But don't expect this to be a slow paced album. It picks up speed and the raw lo-fi production kicks in. With the instruments roaring to life along side the bestial vocals.

This is a very fun, yet dark album. Much like the plague rats that are depicted on the cover, the riffs give off a very mischievous and medieval vibe, plenty of parts that'll get you nodding your head and tapping your foot to the rythym it has. They're very unique riffs that you don't hear very often in black metal. I get very much Ungfell vibes from them, with a similarly medieval theme that they capture as well.

The rest of the instrumentation is layered under the intense wall of distortion that is created with the rapid fire blast beats and sickly riffs. But the drums, much like the guitars, follow that same mischievous ways. With fun almost punky d-beat parts that mesh very well with the tremolo picking. The bass as well is having some fun too, but stays rather reserved only supporting the intense wall of sound that this album creates. What I love are the vocals. Raw, bestial, and almost sickly at times. Giving one the mental image of a swarm of rats creating ear piercing screeches.

When compared to their last two releases its not only their longest, but its also the 'cleanest' produced one. The way the instruments are layered and the distortion that's on the guitars aren't as grading to the ears as say the first one is, or not as 'soft' as their second one as well. It's hit that sorta lo-fi sweet spot where it sounds pleasing to listen to but also stays viscous and dirty, creating that dreadfully wonderful atmosphere that they were aiming for.

A very solid release for those who're fans of more melodic and frantic black metal.