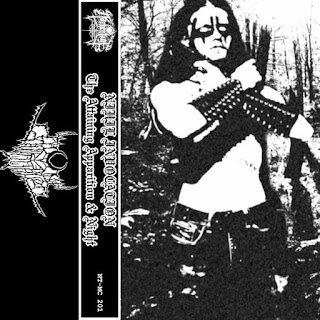 Hailing from the American underground, Deathwalker brings us Nihil Invocation's third full length release The Attaining Apparition and Night. A dark, cold, and hate filled album that shows its aggression in full display. Slow, methodical, and raw, it creeps under your skin and strikes right at you.

Each track stays at a the same steady stomping pace, mid-tempo and not too fast, it lets the guitars fill out the foreground with its cold and skeletal tone that jangles out rather cool riffs that just keeps your head nodding the whole way. Being a one man band, the album is able to keep its focus, not trying to impress you with its incredible speed or hyper technical solos. No, the album is made to spread Deathwalker's hate and nihilism. Which is expressed perfectly through the vocals.

Deathwalker's vocals are in my opinion the shining point of the album. Subtle and dark, he's able to growl out well written lyrics contemplating death its self. It reminds me very much of Darkthrone of old. Especially the Panzerfaust album. Emulating the same cold and nihilistic atmosphere that was made back then.

Its not an incredibly long album either. Only running for twenty-nine minutes it gets its point across very well, with out needing any extra frills. Personally, these are my favorite type of albums. Cold and cut throat, not playing around and getting straight to the nitty-gritty and especially the aesthetic and imagery the album builds as well. I'm just a sucker for corpse-paint and spikes what can I say.

Don't sleep on this album. In my opinion its a great introduction to the more lo-fi and independent side of black metal. Not going too hard on the distortion where it muddies up the sound, but finding a perfect balance to let the music speak for its self with out hiding under an enormous wall of noise. Start here and never look back, for the underground void spares no one.