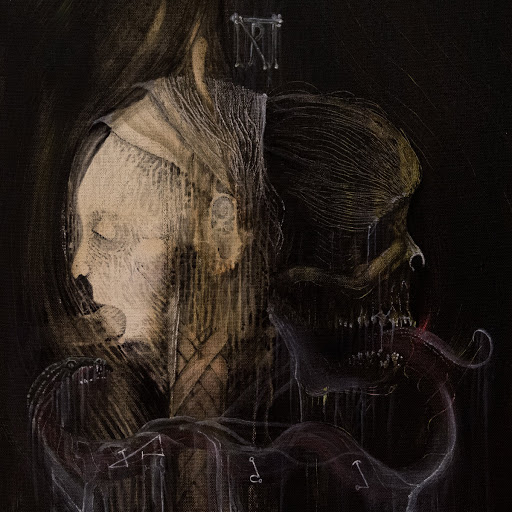 Hailing from the UK, Portent brings us their first full length album, coming off the back of a solid demo and EP combo. This release, Black Humours & Sour Chasms follows similarly in the vein of the previous two releases, with manic and twisted guitar riffs accompanied with noisy and mid-paced drums and bestial vocals that create for a unique and rather charming album.

The album influences lie somewhere in the visage of Ved Buens Ende, another band with twisted riffs and demented song structures, much like this album has. There are some almost blackend rock and roll bits in here, not pushing fully into the intense metal parts, but almost keeping it restrained. The production style is very stripped back and bare bones, keeping the tones of each instrument as pure as can be, which creates for a unique sound especially on the bass which you can hear a lot through out the album. The vocals are intense and evil sounding as well, going for a very bestial and guttural approach to the vocals, it adds onto the paranoid atmosphere the album creates.

The album runs at a usual time, around thirty-seven minutes, but it feels a lot shorter. With the way these songs are written, with an almost punk and rock like structure it really feels like a twenty minute or shorter album. Some of these songs can run longer in my opinion, with how catchy and addictive the riffs are they can go on for a while. I also love how the guitar and bass tones almost clash with one another at times. Like on the fifth track, Rivers of Lesions, the bass and guitar tones toward the beginning almost sound like they're going in opposite directions tonally, creating a unique ear worm that gets stuck in your head for days. On top of that as well is the acoustic guitar part towards the end of the track, it sorta is over powered by the rest of the instrumentation but the little bit that is able to creep out, you can hear how much skill this guy really has.

The song structures on this album are very unique, taking on a very rock and roll approach with what you can call the chorus, verse, chorus sorta structure. At least the best way you can translate it into black metal that is. But it helps with just how catchy each song is. Been listening to this album for about a week straight and I can never really get tired of it since so many of the riffs get stuck in my head. Its almost like a bag of chips, once you pick it up, its very hard to put it back down.

All in all this is a very solid release, and hopefully they follow through with more albums in the future. More unique bands like this are needed in this world.