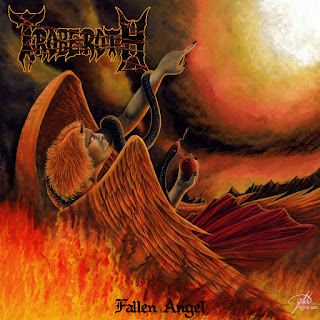 Hailing from my own familial home-land, Costa Rica, come Troberoth with their second full length Fallen Angel. An ode to old school thrash and death metal. Showing their attitude and intensity through their music with aggressive riffs, demonic double bass, hellish vocals and a foreboding bass, combined together to create a blasphemous thrash assault.

Like many who came before, they begin with a calming intro and epic acoustic guitar intro, only to jump in head first being greeted with heavy yet groovy riff and later on thrashy d-beats and thrash riffs. These guys were able to really mix in the deep and guttural death metal vocals, almost in style of early Death or Cannibal Corpse, but with that thrash attitude mixed with it. Through out the whole album are plenty of solos, very fun and it keeps it rather interesting, not having the same repetitive riffs over and over can really get tiring. But not with these guys, they're able to find creative ways to keep that death metal tradition alive.

If I were to put this on a thrash to death spectrum, it'd be pushing more towards the death metal side. Since each genre really has its own distinct sound it can be easy to point out. But all through out I kept thinking to my self how much they were inspired by the old death metal heads. And they really did them good honor. And with the technicality to back it up as well. I've already mentioned the plentiful guitar solos, but that's not the only instrument to shine. The bass on these tracks are extremely killer, with an awesome deep tone to keep the music grounded and creative little solos that appear from time to time.

But there is one thing that I could nitpick, its not a major problem for others, but the drums on this album sound kind of stiff. They're played flawlessly, but it almost stands on top of the other instruments especially the bass and rhythm guitar, with the snare just blasting them out of the way. The double bass kicking is also incredible, plenty of speed to keep the heart racing. I'm not saying its bad by any means, just a personal gripe that I wanted to point out. Doesn't really detract from how good and head bang worthy this album is.

One of my favorite tracks off the album is the fourth album, Thrash 'till We Die. A blasphemous love letter to thrash of old. This sounds like it could've been lifted straight from early Slayer, with speedy d-beats and chaotic guitar solos galore. Its just a great song to get the blood pumping and getting you into that thrasher mind set.