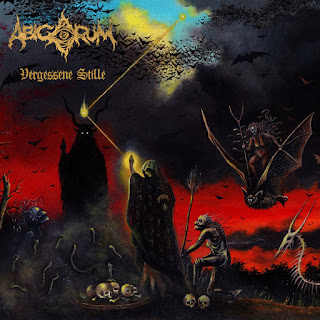 Two man act Abigorum brings us their second full length album, Vergessene Stille, a hypnotic and morbid album that lures you into its trance with blacken psychedelic riffs and a very slow and steady pace.

This is a very unique album. While it incorporates a lot of styles from black metal, especially aesthetically with the guitar tones and primitive and evil guitar riffs, its main footing is set squarely in the doom metal genre. The guitars are fuzzy and create a very hazy and foggy atmosphere, along side the steady beat of the drum that is incredibly simple, but it doesn't need to be anything more than what it is. Its as heavy as it needs to be and has a great sound that blends in very well with the hazy atmosphere.

Most of the songs don't go past a mid-tempo, this isn't your fast paced blast beat style black metal, no sir. Boasting only five tracks and three of them are over nine-minutes, you'd be surprised by how much are packed in the tracks. While the riffs do repeat, they way they're written doesn't make it sound repetitive. If anything it adds a very hypnotic effect to it, almost blending in the background while at the same time making its self known to you. There are also these clean guitar parts that come up that add a very psychedelic effect to the songs. Its almost like psych-rock meets black metal.

The vocals are also very fitting. They're not very abundant on the album, you won't hear screaming all the way through, but the ones that are there are very well performed. Having a very bestial and ethereal effect to them. It reminds me a lot of early Horna.

Personally, I love these types of albums. Its charm is how distinct they are compared to other black/doom metal acts, and not only that, the very creative approach of genre mixing they did here is something that adds to its uniqueness. I highly recommend giving this a listen. Multiple if that, since if you're like me, you'll keep coming back to it.