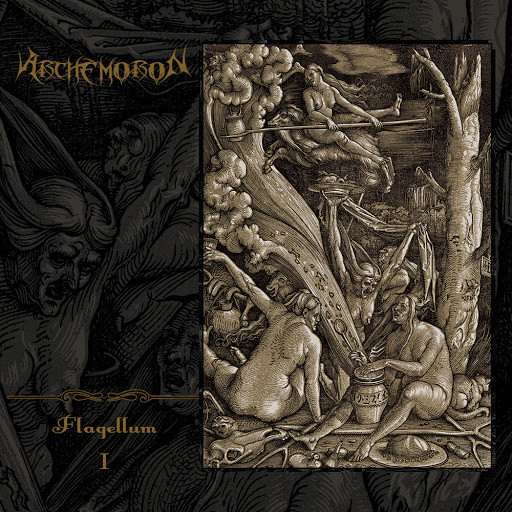 Greece never seems to disappoint when it comes to black metal. Archemoron presents us their fourth full length album, Flagellum I. Its fierce tones and aggressive bewitching melodies truly captures the listener in its magical trance.

The first half of the album is an intense and chaotic fair. Aggressive blast beats and furious riffs that don't let up until the end, where it stretches out and the guitars bring out their solos, which are very hectic and evil sounding. With the very clear and high quality production alongside the crunchy reverb and hellish vocals are something that get trapped in your head. Especially the second track, When Blades Shape our Feelings, the melodies on there are infectious.

Its after the fourth track where the album begins to take a different turn. Incorporating progressive and other traditional heavy metal tendencies, the band are then able to build an interesting and mystical atmosphere, especially when they're able to slow down and show off their skills. The guitar work all through out is just fantastic, with time changes that blend seamlessly with one another. Clearly they intended for the guitars to be the main attraction to the album, and it works very well. On top of that, how the songs are structured, its like each one is a tale on its own. Having progressive metal influences mixed with the black metal hatred makes for a very interesting listen.

This album truly require multiple listens to get its entire being. Its not just your average melodic black metal act, it truly pushes its self and creates a very unique and somber album with a very hard bite to it. Just giving it one listen will not do it full justice as the intricate song writing and the small details in the drumming and bass playing as well as the vocal melodies make for a full and robust listen.

Honestly the sixth song on the album, Red Eyes in the Mist, is a great example of what the album has to offer. It incorporates the fierce blast beats, mid-tempo melodic sections, even the atmospheric ambient sections that are strewn through out the album. If I were to pick a single from it, I'd choose that one since its my personal favorite off the album.

All in all, this is a fantastic album with unique qualities to it that makes it stand out compared to the other Hellenic black metal hordes. This is another recommendation for those looking to get into black metal as a whole, but are already familiar with more progressive style metal acts.