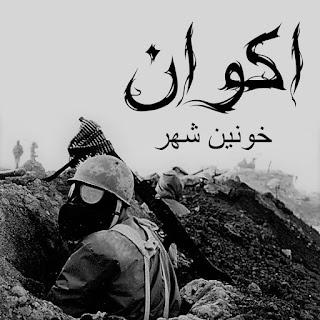 Iranian black metal act Akvan, releases their heaviest album yet. Not necessarily in terms of sound, but in terms of emotion and imagery. Akvan is known to incorporate Iranian history and culture, using folk instrumentation and note arrangements in many of their songs, but this most recent release titled City of Blood, takes a look at modern Iranian history, touching upon the tragic events that took place during the 1980s where Saddam Hussein invasion of a, at the time, economically devastated Iran.

The music very much reflects the events that took place. The first track blasts you into the moment with its furious guitar riffs and hectic drumming that creates a very tight wall of sound that leaves the listener anxious, as if bombs are going off all around them. The track later on becomes more melodic, incorporating Iranian folk instruments and notes that Akvan is known best for. It adds a bit of color to the rather bleak album.

Each of the four tracks are a heavy bombardment after the next. With each of the songs structuring its self around the lyrics. Speaking of the lyrics, they tell stories of war time, honoring the young Iranian men who took part in the battles. The vocals them selves are very much in the traditional black metal style. Cold and harsh, they're about as ear piercing as the guitars.

What I think does this album good justice is the way the production style is. Its very much in the lo-fi sort of realm. But the grittiness of it really helps push the stark and bleak reality of the events the album speaks of. It helps give it a sense of grounding and reality that a lot of black metal really doesn't do, what with all the fantastical imagery. Sometimes reality is a lot more darker than fantasy.

I also wanted to mention my favorite track from the release, the third track در گورهای تنگ / In Narrow Graves. Its pretty much a folk piece, with its title taken from a famous Iranian poet, Qeysar Aminpour / قیصر امین‌پور, who's work is well known for its anti-war themes. Its a beautiful and contemplative piece, played solely by a traditional Iranian string instrument. I'm not sure what the name of the instrument is, but it is immediately identifiable upon listening and appears all through out the album.

All in all this is a very interesting and different album that I had the pleasure of listening too. I was a fan of the band's previous releases and this is just cementing home why I like the band in the first place. Its unique approach to black metal, intelligently blending the roots of the local culture with the extremity of black metal. Give this a listen when given a chance, you won't be disappointed.