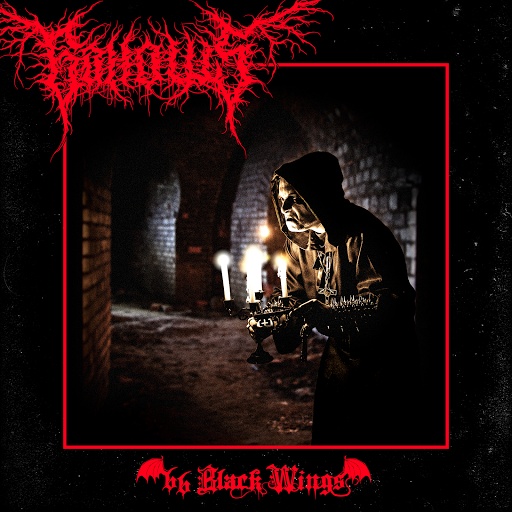 I think black metal has come full circle. While there are still many out there who experiment with the black metal formula and try to push it in a different direction, be it with shoegaze influence, death metal influence, etc. There's one thing that seems for certain, and that's the second wave Norwegian sound seems to be timeless.

Gallows, hailing from Salem, Massachusetts, have released their first album, 66 Black Wings. A timeless sounding album that sounds both modern and fresh, yet at the same time sounding as if it came from the early 90s catalog. Taking clear influence from early Darkthrone, Emperor, Gorgoroth, and also heavily inspired by the US black metal scene of the secondwave, the album cover for this release really reminded me of Black Funeral's first release Vampyr: Throne of the Beast, and the style of music is also extremely similar as well with the heavily gothic themes.

But unlike Gallows' vampyric counter parts, they take a more witching approach, taking in account the local history of the town the band is from. It makes sense a black metal band this fierce and dark sounding comes from the home of the witch trials.

But, moving on to talk about the music at hand, its cut throat, cold, and deadly. Immediately when starting the album you'll be greeted by furious blast beats, hellish and necrotic screams, and ear piercing guitar that lifted its tone straight from Under a Funeral Moon. Except, with Gallows, the bass is much more audible and adds a hefty weight to the rather catching guitar riffs all through out the album.

The instrumentation is primitive in the hands of skilled players. These guys really know what they're doing when you listen close to it. The changes in time signatures are extremely smooth and, when achieved correctly like in this album, you shouldn't realize that the pace of the beat has changed. It should be a seamless transition and its done flawlessly here, especially when mixed in with the dark bewitching atmosphere, it creates for some really memorable music. These riffs have been stuck in my head for a few days now.

What I also love are the little added details to the music. Beyond your typical guitar, bass, drums, there are bits and pieces of keyboards in the background, like on the second song Ulisa's Wreath you can hear what sounds like a harpsichord in the background, in other songs are the chiming of bells, and other atmospheric touches that really drive home that extremely gothic aesthetic this album has going for it.

From front to back, its all straight homeruns. Each song blows the other one out of the water, and it really makes me excited for what ever else this band has in store for us in the future. I highly recommend this to any fan of black metal. Something to like for everyone here.