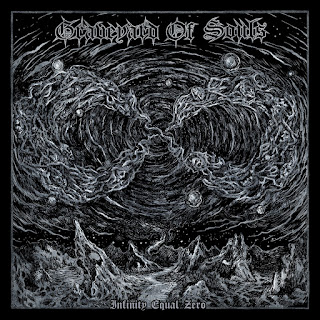 This is the first album I've heard from these guys and I'm not sure how they compare to their previous releases, but this one is pretty good. The instrumentation is performed very well, with only two members in the band its easy for them to keep focus on what sorta of parts to write with each instrument, the production as I've mentioned before is very crisp and clean, being able to hear and pick out every note that's being played, making for a very easy listening album to play in the background.

Each song is very long, which is common for a doom/death style band, but it can be a little tiresome. The riffs, while crushing and heavy, repeat in the same fashion and stretch out for long periods, making it kind of exhausting to listen to. On top of that the drums have very little variation in them, which again, can get tiresome after a while, especially since many of the songs share the same sort of drum beat. But, there are some cool little drum fills here and there to accent the consistent beat and adds a bit of color to the music. But its not really saying much as it gets drowned out with the guitars that really shine on the album.

But this album is very thick, there's a lot of layers to each song to unravel and hearing the little details in there are very cool and charming. There are keyboard parts that create a very astral sound for some of the guitar solos on the album. Speaking of the solos, they're probably the best part of the album and very memorable. The notes create a swirling whirlwind like effect that pull you into the music and when combined with the consistent growls from the vocalist it really creates a great atmosphere.

Out of the seven tracks on this album there are two songs that I thought stood out and I really enjoyed. The first track on the album Madre, is a good example. There's everything needed on this song that you'll get from the rest of the album. Great guitar work, both rhythm and lead, the drum works on this track are also very consistent but have more fills and variations as compared to other tracks on the album, and the vocals are great. The second song I thought was really good was the last song on the album Time to Leave, its a mostly instrumental song with very somber and melancholic riffs that sort of stand out compared to the rest of the album. While the full album does have a tinge of melancholy in it, its not a very emotional album. But this last track seemed to be where they left all their emotion as I think its a truly beautiful and almost uplifting song.

All in all I wasn't very impressed by the album, but I'm sure there are those out there who'd enjoy it very much. Its slow, heavy, filled with amazing guitar work, and kind of unique in the doom/death genre not going for either extremes and really creating an good easy listening sorta album.