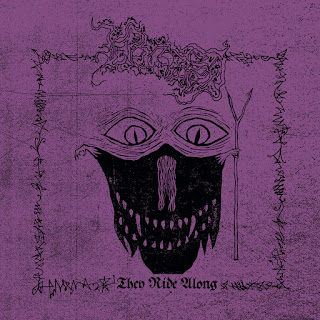 Austrian occultists Hagzissa presents us with their first and only full length so far, They Ride Along. Coming out in 2019, this album is a cryptic and mystical take on old school black metal. Capturing the listener with harsh vocals, mid-paced drums and blast beats, as well as stripped back and primitive guitar riffs galore.

After being greeted by the deafening feedback of the guitar, you'll begin to understand the direction the album will take. While, the album can be a little predictable, keeping, for the most part, the same sort of up and down d-beat style drum beat, as well as the stripped back and simplistic riffs, it really creates an almost crust-punk sorta sound. Making this album a very easy listen in my opinion especially with the way the production style is. The guitar tones are cold and dark, as black metal should be, but they can fall a little flat at times especially when paired with the vocals which in my opinion shine the most on this album. Especially when they mix in the more cleaner chanting and the harsh screeching and other strange noises the vocalist presents. It s a truly twisted and demented take that fits perfectly with this type of sound they're going for.

What variations there are with the drums, though, do show how impressive the drummer's skill is. For example toward the end of the seventh track, Atavist Kama Aconite Trance, they break down into this cacophonous blast beat section that really lets the drummer loose and able to stretch his arms in a blazing sound.

What's also really nice is how seamlessly the tracks flow into one another. While not necessarily a concept album in and of its self, you can tell they had a focus and an image on what they wanted to achieve and they were able to do it. While taking influences from the past from bands like Sigh, early Darkthrone, and others, they were able to truly capture their own unique sound thanks to the vocals and the raw style of production these guys went for.

This would be an easy and laid back listen for those who are already familiar with black metal and its ilk, but I found to have really enjoyed this album either way. Sometimes its nice to just have an album to spin that doesn't need much focus or attention and works its musical occult magic in the background. Looking forward to what ever these guys plan in the future if they have any.