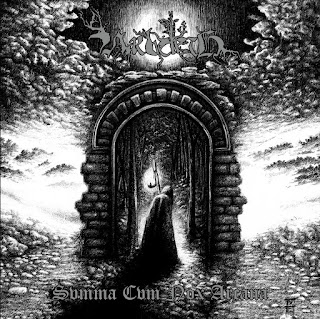 I am incredibly excited to review this album. The former one man band from Cuban, Narbeleth presents us with their latest ritualistic offering. Now, ditching the pre-programmed drums and gaining another member on the live drums, breaths a whole new unholy life into the band. I've been listening to these guys from the beginning, and Dakkar, the founding member, has been killing it since 2009 on their first demo release. Being from a very uncommon place for black metal, Cuba, they're able to create music that's just as cold as their European cousins. Taking inspiration from bands such as Judas Iscariot, Arckanum, Darkthrone, Armagedda, and many other well known acts, its no wonder they're able to make something so wicked.

Now, talking about the album at hand here, Svmma Cvm Nox Arcana, is a continuation of what they started with, except approaching it from a much more refined and tuned perspective. Their earlier albums were very much lofi, but the production here is clean and pristine yet still staying raw and creating the cold comfort we're all familiar with in black metal. Each track is like a time machine, taking you back to when black metal was still new and kept that satanic energy that we've all grown to love.

The guitars are cold, the riffs are heavy, and it really sounds like Dakkar has grown a lot more comfortable with his instruments and vocal performance. He's not trying to show off with fancy solos or any sorta flare, but what we do get are incredibly catchy and consistent riffs that are like ear worms getting stuck in your head and eating away at your brain. The drummer who has joined, Vindok, is an amazing drummer. Furious blast beats, great mid tempo sections with amazing fills. It only pushes the music further, and when comparing it to the previous releases is a much needed addition to the band. Not saying the drumming before wasn't good, but clearly wasn't Dakkar's strongest suit. He's clearly much more comfortable with the guitar and vocals.

And as is tradition with each Narbeleth album, there's at least one cover from a band that has influenced them greatly. This time they did a cover of Norwegian black metal act Nettlecarrier, and very fitting for this album seeing as how the song structure is very much in vein with the rest. Heavy blast beats, furious tremolo picked riffs, and cold vocals that pierce the soul.

There's honestly nothing to complain about this album. Its pure, black metal in the best way possible. Narbeleth has come a very long way from their humble origins, and have now reached their peak. This is a easy contender for best album of the year to me. Who knows what else this band has in store, but all I know is that I'm excited for it all. This is trve black metal.