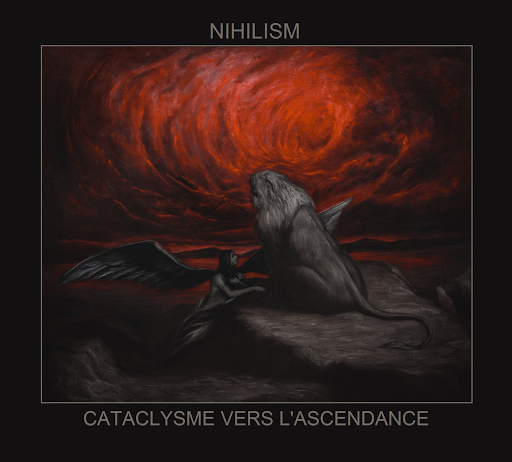 The modern Greek scene, in my opinion, is one of the best out there. Many of the releases I hear coming from there have really blown me away. And this four-piece band Nihilism is yet another fantastic release from the Hellenic world.

This second release of theirs is a chaotic cacophony of sound that has a focused and tempered approach to their sound. The guitar work is the shining star of the album. There are layers to their riffs, one on top of another that, from the untrained ear, just sounds like your typical wall of sound with angular notes that jut out here and there. But, when listening closer, you begin to uncover just how intricate and creative these riffs are. And it doesn't stop with just the guitars, the drums are blindingly fast, with impressive drum fills and furious blast beats that keeps the music grounded along side the bass.

The vocals are my favorite part. They're not your typical death metal growls or black metal screeches and they don't necessarily follow the rhythm of the music. They sound like angry barks coming from some sorta hellish animal, assaulting you along side the incredibly powerful music.

This is a very dense album, each track are meant to be played from start to finish as the album is sort of structured to be like one continuous song. Each one slowing down the further you get through the album. Its almost like a sprint. The first track not even letting you get prepared, jumping straight into the blind fury, while each track that follows, while keeping that same fury, really do slow down and become a lot more atmospheric. The notes begin to breath easier and it creates a really great mental space while listening.

There are a couple of ambient noise sections that are thrown in either at the ending or beginning of certain tracks, but there's one, the fifth track, just being one four and a half minute ambient piece that, while I do think is a cool piece, I feel like it really throws the pacing of the album off and could've been shortened or maybe had been an intro track to the album. Either way, the placing of the track seems a little bit out of place coming off the previous track, which is rather hellish sounding. What I thought was rather fitting though, was at the ending of the last track being some sort of church choir singing. Its eerie and dark sounding and I think is a very nice touch at the end.

At the end of the day, the Greek scene is extremely strong. And this is a prime example of it. Nihilism is a fantastic band and this album is a must listen and an easy contender for best of the year in my opinion.