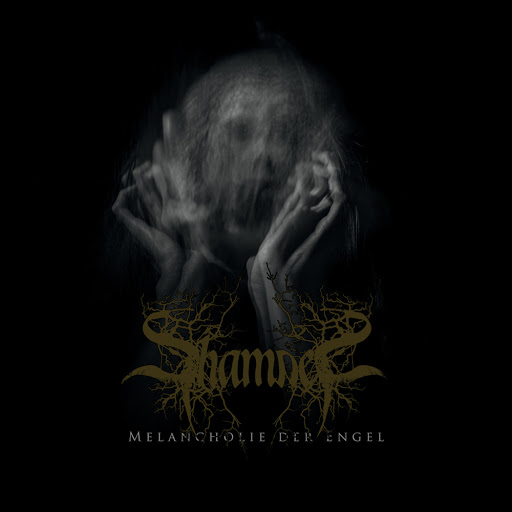 Debut album from one man funeral doom act Shamael, titled Melancholie Der Engel is an incredibly massive and powerful album. The sole member, Raffaele Galasso, known for his other works in Gardenjia and Nightcrush, created an introspective and emotional album here. Slow, focused, and dark, this album is much like falling deep into a dark abyss, knowing only the darkness that is trapped in one's psyche.

This is very much an album you'd need to listen to in one sitting. As the way each song is structured, they're made to flow into one another flawlessly, as if telling a story with the music. The vocals, while a bit hard to pick out exactly what he's singing with out looking at the lyrics, are wicked. Harsh, deep, and heavy, it just creates a very crushing atmosphere along side the very consistent but flawlessly played drums, and the atonal and almost destructive guitars really creates an incredibly dark atmosphere.

Speaking of the drums, in my opinion they're what shine the most off of the album. Incredibly drum fills that are lightning quick and can be missed if you're not paying attention. They're almost like tinges of light being shining in the abyss and helps break up the monotony of the slow pace each song has. While there's not many tracks on the album, only sport about four tracks, they all go for a long while, none of them going under seven minutes. But that's okay. Each song is very different from one another, yet keeping the same pace. Some songs have different details added to them, like keyboards for example to flesh out the music more, or interesting riffs and solos that makes the sound a lot more vibrant.

The ambient sections are also a great touch to the album. It helps set the mood much more and are a great break from the crushing heaviness of the album. The gritty and harsh tone of the guitars also help build the ambiance of the album as well, its honestly a great album to have on in the background while also being phenomenal if you listen to it intently.

This is an album I really enjoyed. Not much for me to complain about on this one. Its everything that I like about doom metal condensed in a clean forty minute passage. Its raw, dark, and oppressive, and it gets a big recommendation from me. I will definitely be looking forward to what ever more Raffaele releases in the future.