Shrine of Isanabilis – Disciples of the Void 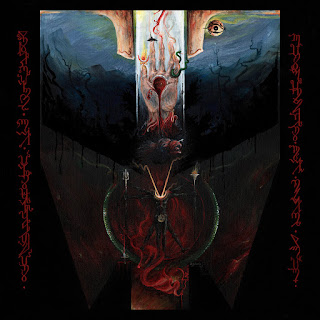 German occultists Shrine of Isanabilis dropped their debut album out of the void back in 2015 titled Disciples of the Void, its a dense and macabre album with blinding fast blast beats and satanic lyrics growled out by hellish vocals. The guitars are twisted and demented, creating melodic yet aggressive riffs that are just as frantic and panicked as the drums.

Right off the bat you're greeted by a cacophony of sound, guitars, drums, bass, all mashing together into a formidable and dense track that leads into the rest of the album which carries very much the same vibe. The production is extremely clean though, leaving each instrument room to breath and have them be colorful and vibrant as they are oppressive and damning.

This album also doesn't let up for a moment, each track is an unrelenting force of blast beats being driven down onto the psyche. There are very few moments of rest or slower moments at all until the last track on the album, which is the slowest and doomiest sounding track on the whole thing. And yet they still find a way to hold that cold and aggressive atmosphere the rest of the album had, mainly thanks to the vocals. Each lyrics is dripping with occult symbolism and are hissed out like a deathly serpent.

Even though the band hails from Germany they remind me very much of the Icelandic hordes like Svartidauði, Worm Lust, Andavald, they all share the same twisted and at times psychedelic qualities in their music. Its a type of sound in black metal that I wish was explored more often, and creates a really unique and interesting sound that really draws you in. I very much enjoyed this album and give this a solid recommendation. Luckily, Shrine of Isanabilis has since released an EP and a second full length album, both of them also worthy of a listen.