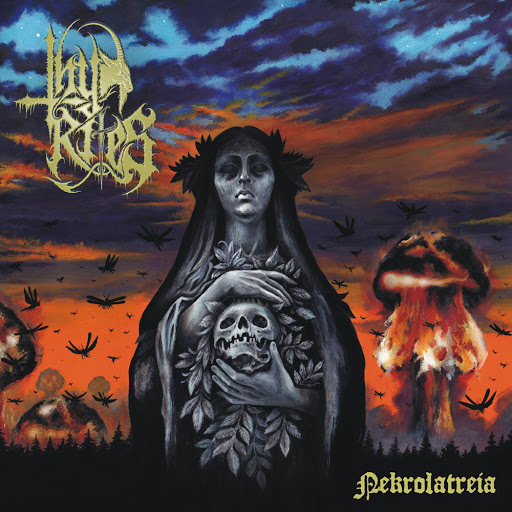 Hailing from Brazil, Thy Rites presents us their fourth satanic offering, Nekrolatreia, a blacken thrash assault that takes after bands of the past like Sarcófago, Bathory, Hellhammer, and others of similar ilk. Its a solid and ferocious album that'll keep you head banging and moshing around.

The instrumentation is very solid, speedy d-beats, evil riffs, and hellish vocals all with a refined yet stripped back production style that compliments very well with the thrashy style. There are some wailing guitar solos here and there on the album, but its mainly a riff heavy event. They all around nailed the sound they were going for here. Also, the guitar tones are very crisp and pleasant to the ear while at the same time still having that gritty distorted edge you'd expect from a band like this.

But, there are some draw backs. It can be very repetitive. While how evil and ferocious it can be and how well they nailed it, its just sorta the same few notes arranged differently for each song. The drums, while I do have a soft spot for speedy d-beat thrash drums like this, its just very consistent and has very little variation through out the whole album. Some may find this appealing, and personally, I can in the right context, but it just seems a bit draw
n out here.

One of my favorite tracks is kind of different from the others, the tenth track The Feral Communion, and it truly sounds feral. The drums are these chaotic blast beats that only seem to get in order when the guitar is wailing away at its solo, and I think its probably the one song that really stands out from the rest of the black-thrash list.

This band seem to have gotten their aesthetic down to the T. Its very reminiscent of bands from the past, and it does well by keeping that tradition alive. If say this album was transported back to the late eighties, they'd fit right in. But in today's modern age, I feel like they don't do to much that really separates them from the rest. I may be nitpicking, seeing as I still very much enjoyed the album. Sometimes bands don't really need to reinvent the wheel and can get by with the try old classic and Thy Rites really proved it. Its not a hard listen at all in my opinion and a solid recommendation for anyone who loves blacken thrash metal.