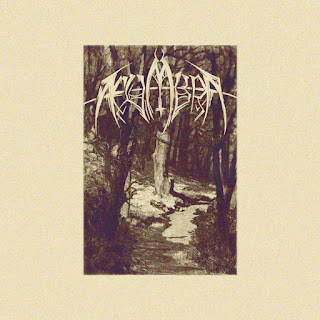 A debut hailing out of the US, comes Æumbra. This is a very solid and stripped back raw black metal demo, with echoing screams, primitive guitar riffs, and bone like drumming, its a very solid release that stands firm along others of the same kind.

While it may be your typical black metal affair, with blast beats, mid-tempo parts and what have you, what makes it interesting is how the guitars aren't really the main focus of the release. It takes a step back, mainly playing a supporting role for the vocals, drums, and bass, which stand in the forefront for sure.

The vocals are harsh screams with an added echo effect to them that creates that lo-fi aesthetic the band is going for. But on its own they're very impressive. Bestial and damned are great ways to describe it. The third track, Isolation, the vocals sound the most pained. It sounds like they're using their entire being to force out this pained echo that really sends chills down the spine.

Following the vocals is the bass, which is much more prominent compared to others of the same sorta raw black metal category. They're fierce and heavy, letting the songs feel much more full. If say, they decided to mix the bass to be a lot more in the background, letting the guitars stand out more, it'd honestly not give it that same impact that the songs have in the first place. The guitars are rather stripped back, playing out primitive black metal riffs that get the job done. They're there to create that wall of sound that's all so comforting to the ears while the rest of the instruments do their jobs.

The drumming as well is another tight one. If you were to put the tone of the whole set on a scale it'd easily be a 10. Its got that full warmness that you'd get with a live drum set, no triggers or any other frills in it. It also does sound like it was recorded along side the other instruments, with the vocals being separate. Which again emphasize how they want the vocals to present them selves. They want you to get that cold chill down your spine and they truly succeeded. Looking forward to what ever more they put out in the future, but what we have here is fantastic.