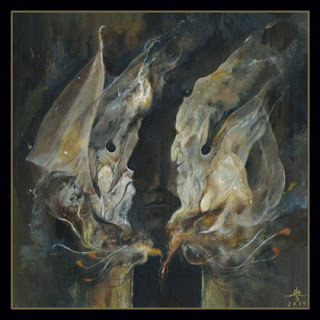 New Zealand warmongers Vassafor's second album Malediction is a massive and evil album, praising the void and bringing forth celestial horrors to life. This is the first album I personally have heard from them and am blown away by what I've heard. A masterful mixing of blackened death metal that reminds me of the likes of blackened death metal legends Teitanblood, Pseudogod, Diocletian, and many others. But standing out from them by taking a much more slower approach mixing in doom elements into their music that builds the oppressive atmosphere and crushing sounds. These guys have been around in the New Zealand black metal scene for awhile as well, starting back in 1994, only taking a short break during the late 90s to return with many smaller EP releases and their first full length in 2012.

After a few splits and a live album Malediction makes its presence known with its massive sound. Its very dense. Taking multiple listens to truly take in all there is in this album. From the crushing and oppressive guitar tones to the bone rattling bass, even the drums have this deep and impressive sound that shakes you down to its core. The tracks are long on this album as well, the duo take their time with their song writing, letting it stretch out for up to sixteen minutes, like on the first track Devourer of A Thousand Worlds. But that's okay, you get really immersed in the music. It takes you on this dark and twisting journey that is truly awe inspiring.

The vocals are these echoed and tortured cries of pain that seem to scream out from below the music, very much mixed under the instruments, plus with the added effects it creates a really mysterious and cryptic atmosphere. The guitars and bass are really heavy and I love that. The chaotic and cryptic riffs that are drawn out along side the really bone shaking bass that are both played really well, clearly in the hands of a skilled player. Especially the guitar solos that I personally wished were mixed a bit higher as they're over taken by the back up rhythm guitars. Maybe they did it for an aesthetic choice, I'm not sure, but what you do hear are these well written and cosmic sounding solos that almost remind me of Inquisition when ever Dagon goes on his solos, which helps make this band stand out from their peers seeing as when ever other blackened death metal type bands go on their wailing solos, its almost always something hellish and chaotic, something I believe this band wasn't aiming for on this album, wanting to keep things more focused and straight forward.

This is a masterful album and a truly epic album. One of the best I've heard this year and I am glad I was able to pick up a physical copy of it, because it sits proudly along side others in my collection. Highly recommend giving this album a listen when given the chance.