Warhammer - The Winter of our Discontent 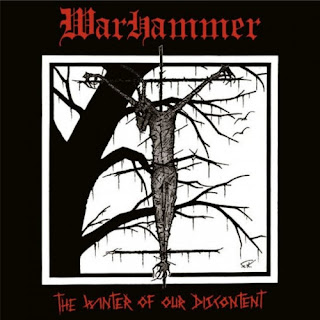 This is an interesting album. It took the underground by storm back in 1998, standing out with their fervent devotion to Hellhammer, even naming them selves Warhammer in honor of that legendary band. For the time period black metal was filled with a lot of fantasy bands. Taking after the Norwegian wave and incorporating synths, writing Tolkien lyrics and of course, everything satanic. But Warhammer took it another direction with lyrics about the harsh truth of reality, leaving little room for fantasy. When looking back they really stood out among the masses, and because of that it became a truly cult classic among the European metal crowd.


Now when I say these guys were true Hellhammer fanatics, they were. In different interviews they'd talk about how they had gone out of their way to collect different equipment from the past and present to recreate the same raw and primitive sound Hellhammer and later Celtic Frost became iconic for. And these guys I think succeeded. The drummer, Rolf Meyn, sounds almost identical in playing to Denial Fiend of Hellhammer even mimicing the iconic d-beat all through out the album. The bass and guitars performed by Frank Krynojewski is another example of skilled playing in the primitive way, again capturing that same sound Hellhammer hammer had with simplistic riffs made fierce and heavy thanks to the rough and harsh tones they were able to capture as well. And of course Volker Frerich (R.I.P.) grunting out the harsh lyrics in the same way of the past bands.

I do have to say though at first the vocals were a little jarring. I wasn't really expecting such a forced delivery I laughed at first, but as the record continued on it dawned on me what they had captured. They had mastered that primitive black-thrash sound of the 80s, bringing back to life what was once thought dead at the time and never to be relived again. Each song just as brutal and intense as the rest and still making their mark of not just being some Hellhammer cover band but their own distinct idea with the fittings of the past. Even down to the cover which bares a striking resemblance to the legendary Apocalyptic Raids by Hellhammer. But, I guess being similar yet distinct wasn't the aim of the band its self, as they've said in a couple of interviews how they don't care for their early works anymore, The Winter of Our Discontent included for not sounding enough like Hellhammer. Which I find a shame seeing as this is a very fun and heavy album to listen too and a true cult classic.

So basically, if you like Hellhammer or Celtic Frost, you'll like this album and this band no matter what. But personally, if you're not familiar with either of those sounds and are more comfortable in the 2nd wave Norwegian style black metal, then you'll be in for a surprise with this one and in my opinion not a good place to start if you'd want to take a look at what laid the ground works for the black metal we know today, because these guys know exactly what that ground working is and what made it so addicting in the first place.

GET THE NEW REPRESSINGS HERE

Cam also be found on any streaming platform.