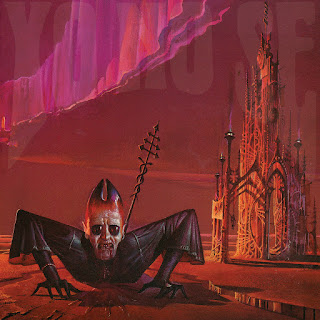 Bristol based hard rock band Yo No Se presents us with their second full length Terraform a fuzzy and laid back head banger of an album. While listening to it, I felt like their influences lie in the grunge and psych-rock phase of the mid to late 90s, taking inspiration from bands like Nirvana, Kyuss, Queens of the Stone Age, among the many others.

Starting out, I gotta say this album is good company with a bowl packed full of that green sticky stuff. The music is psychedelic with skillful guitar riffs, warm and fuzzy solos, and my favorite part of this album, some really sick bass lines that really fill out the music more. The tracks are rather simplistic in nature, but they're very colorful and filled with rich textures thanks to the tones they chose for the guitar and the effect over the vocals.

Speaking of the vocals, they're very grunge. Sounding almost like a Kurt Cobain if he'd done a lot of acid instead of heroin. Very drawn out and long, sometimes even a little monotone. But, that doesn't make them bad. Not at all. Rather, they're fitting for the music at hand. A very powerful and dominant singer would, in my opinion, take away from the rest of the band and the instruments, since a lot of the songs are very creative and almost feel like a collaborative effort.

My favorite part are the drums on this album. Starting out, the tone is raw and authentic. Its a very natural and distinct sound that hearkens back to older times. You can also tell that he's very skilled at what he does. He can switch timings rather flawlessly, and although just a little sloppy at times, it adds to the grungy and almost punk like style the music has to it. There are also some great drum fill moments on this album that went well along with the guitar solos.

All in all this is a pretty good album. Its very solid and it shows the band has a lot of potential to grow and experiment in the future. While, I haven't heard the first album they released, this is a very solid starting point and makes me curious about what else they have to offer. Give it a listen if given a chance, especially if you're a fan of fuzzy psych-rock.

Email ThisBlogThis!Share to TwitterShare to FacebookShare to Pinterest
Labels: 2021, Grunge, Hard-Rock, Prog, Psych-Rock, Yo No Se