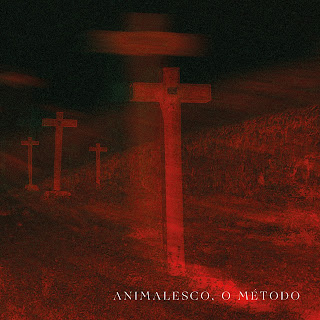 Hailing from the Portuguese underground, Animalesco, O Método, coming off of the back of their previous 3 demos, have put out their first self titled album. This is a blindingly fast, neck breaking album filled with crust punk and death metal sensibilities all wrapped up in a morbid and dark package.

The album introduces its self with an apocalyptic opening, setting the stage of these metallic maniacs to being their assault. The album doesn't leave much room for the atmosphere besides the opening and ending tracks, the following seven tracks are the main course for the album. Combining elements from bands such as Entombed, early Simbiose, and even some early Sepultura mixed in. But what separates this band from these others is just the sheer amount of aggression this album holds. Its very unforgiving, and incorporates more crust punk elements, especially with the drums, sticking to a blinding fast d-beat for most of the album. Of course you got your break downs in vein of Entombed, with groovy guitar riffs that just possess the listener into head banging along.

There are moments on this album where it slows down a bit, especially on the fourth track, Sepulcro O Meu Templo, where the beginning is very much a mixture of doom and death metal, and later of course picks up speed and begins assaulting you once more with the powerful drums. The production and mixing really favored the drums on this album I feel, as its very prominent through out the whole album and it doesn't seem to let up what so ever.

The vocals are very cool and very much in the style of old school crust punk, having two vocalist, who go by Moska and Pedra. One delivers a blood boiling and inhumanly deep growl, perfectly fitting the death metal aggression while the other interjects with high pitched and shrill shrieks in vein of past crust acts. When paired they make for a very vicious duo that is rather unique to someone like me who's more familiar with the metal world and hasn't dipped their toes much into the crust punk world. Its extremely memorable and I think a major highlight of the album.

What's also surprising to me is just how fast the album feels. While each song has a decent length of three minutes or more, the album only runs for about twenty nine minutes, but it feels so full and they really don't miss a note at all. Once you reached the final track of the album, and hear the electronic sound of a twisted heart beat, you'll know the assault is over, but you'll be coming back to it again and again just like I did as each track is extremely addicting. While there isn't one track that truly sticks out as being extremely memorable, when listened to as a whole piece it truly feels like a complete work that stands on its own. No singles needed.

This is a fantastic first release and truly inspiring album really. It gets you moving and the blood flowing, makes you want to get out there and grab someone by the throat till they stop breathing. I'd suggest this to those who are fans of thrashy death metal with heavy crust punk influences.