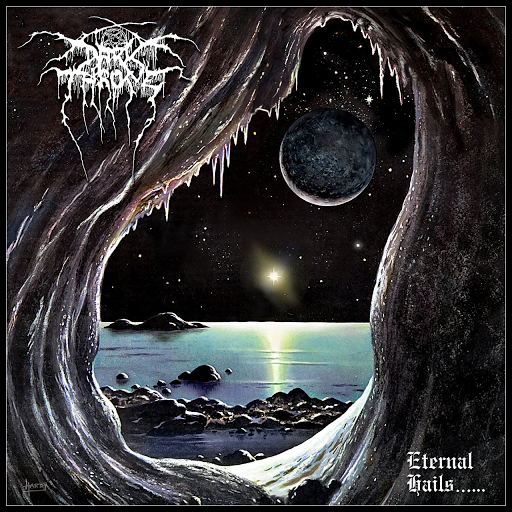 The legendary nordic duo, Fenriz and Nocturno Culto, return yet again with another release pulled from the darkest depths of space. Eternal Hails.... is Darkthrone's nineteenth album to date. It captures the raw essence of true heavy metal distilled in a way that is distinctly Darkthrone's own. It is both very different from all of their other releases, yet vaguely similar. Its easy to say that the duo have found their distinct style and can apply it to what ever genre they want it seems.

Darkthrone have traversed across many genres. Starting with straight death metal, later going into black metal which is what they're most famous for. Soon, after growing tired of creating the same black metal sound, Fenriz and Nocturno Culto decided to diverge into other genres that spoke to them and influenced what they do today. Things like crust punk, doom metal, speed metal, thrash, and many other genres of heavy metal and hard rock.

Back in 2013, they released their first pure heavy metal album The Underground Resistance, it was from here that they decided to continue their love affair with the old school sounds that was the very foundation of black metal and all of the other metal genres we're aware of today. Their sound, while familiar, was a long off shoot from where they've started. Later on, they released albums like Arctic Thunder and Old Star, which incorporated their darker more gothic aesthetic, especially Old Star, what with its heavy Candlemass influence.

Finally, Eternal Hails.... is in my opinion a combination of everything that they've released to date. While still sticking with the old school heavy metal influence with the riff heavy style with the production sounding like it was lifted right off of a dusty old record. It sits somewhere in between lo-fi and hi-fi. Bands from the 70s would've killed for a sound like this. Fenriz's drumming is phenomenal on the album. The timing is perfect mixing in a lot of old style hard rock and metal style drum beats. Nocturno of course, killing it with the riffs as usual. This has always been one of the strongest points of Darkthrone and its their guitar work. This album is filled with riffs that will probably never leave your head. They're not only just catchy, but they're dark, cold, but if there's one thing that's lacking from their previous releases its their aggression. But that's okay. A man can't stay angry for ever, and while that may reflect in their music, it doesn't draw away from what they had to begin with and that's pure talent.

You can tell they had a lot of fun recording this album. Especially since they brought in some things that one would think they'd never hear on a Darkthrone album, and its a synthesizer. They've decided to bring in a moog synth on the later half of the album, and boy does it add to the retro feel this entire album has. Knowing how peculiar Fenriz can be with his metal, especially when it comes to what kind of music Darkthrone makes, synths have been off of the table for the longest time. But, I suppose with age comes experimentation and they've really nailed the use of it. Its used very sparingly, only for an ambient, psychedelic and space alien like passage towards the end of the fifth track, and best track off the album in my opinion, Lost Arcane City of Uppakra.

For new and old metal heads alike this album is a certified head banger. This is a very solid album that I thoroughly enjoyed from front to back and was very excited to hear once it was announced. While I do admit its not as high energy as the rest of the albums, it still fits with the rest of Darkthrone's catalog and a must listen for those who worship the old school such as my self.