Enchanter – Defenders of the Realm 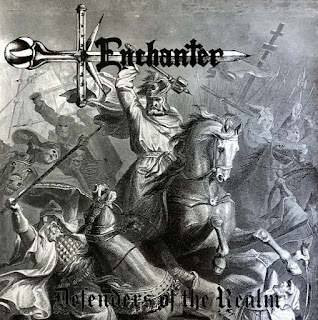 Four crusaders hailing from Michigan here in the United States, banded together many years ago to form the band Enchanter. Under that moniker they recorded a series of demos and tracks together which were sadly forgotten to time and had left to collect dust. But thanks to Arkeyn Steel Records, they have unveiled these tracks from the darkest depths of the underground and brought it up to the light, titling this album Defenders of the Realm.

This ten track epic consists of righteous guitar riffs, skillful drumming, and heroic vocals that send hails up to the gods above. What surprises me right off the bat are the quality of these tracks. If I wasn't aware these were meant to be apart of demos originally, I'd have thought this is some sort of forgotten power metal album from the late 80s with new wave British heavy metal influence wrapped up with it. The mixing is near perfect, with the vocals coming in nice and clear upfront, the guitars have a good solid quality and aggressive tone to them, the drums are also on point, with impeccable timing and great fills every now and then that almost go unnoticed a lot of the time. I wish the bass would be a bit more upfront, but, it serves its purpose and gives a strong undertone to the guitars.

You can tell the difference between the recordings on the album, not in terms of quality, but in terms of musical direction. The first four tracks have a more prog influence with plenty of solos and melodic interludes in between the heavy metal assault. The following four have an almost more thrash metal approach, while still keeping its footing firmly in the power metal and traditional heavy metal arena. The final two tracks were released originally as a single, Ethereal Quarter, is also my favorite off of this compilation. Its one of the last recordings the band did while under the name of Enchanter, and its an amazing farewell, showing off each of the musicians skills, and sounding like the two demos condensed into an epic seven minute track.

There's very little to complain about here. All in all the album as a whole is amazing and its a shame they didn't get the recognition they deserved back when they were an active band. They would later reform under the name of Longings Past and would continue for a little while what they started with Enchanter, but nothing can top what they did here. Solid release for those of you who worship the old school, much like my self.