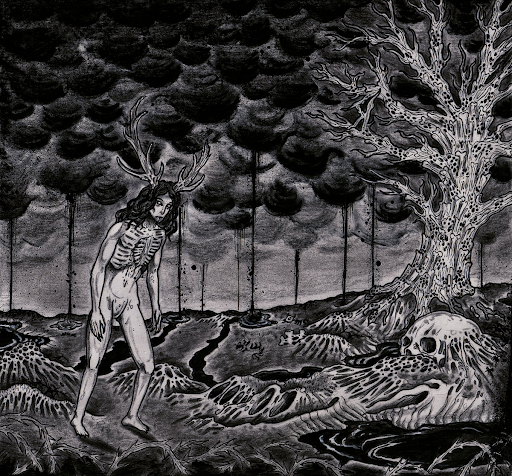 Shambling froth from the necrotic underground, French one man black metal act, Anakreb, releases their first self titled full length LP. Its very much reminiscent of the earlier days of the second wave of black metal. Its cold, dark, and cuts straight to the point with no added bells or whistles. This is simply pure black metal.

Starting out, right away you'll notice how tight and clean the guitars are. Each song are filled with tremolo picked riffs lifted from the black metal text book, though with some slight stylistic choices here and there that bring it forth into the modern age. Its very well performed and extremely solid, but with little variation, it can get rather boring, with even tracks two and three almost blending together to sound like one long song. To some that may not be a problem, but I found it to be a little tiresome after a while. What really drives the music along are the drums in this. Very prominent and well layered, not being drowned out by the guitars or bass. It brings forth a very stable ground working for the rest of the instruments to play off of. The vocals through out the album are another incredibly nice touch. Cold and high pitch screams that are blended well into the guitars, creating a white wall of noise that crushes really brings forth the raw emotion in the album.

I think my favorite off of the album is the final track Purge. I think it shows the potential Anakreb has to bring forward. Its a very mournful and melancholic lament, and takes its time, slowing its pace down and ditching the blast beats that are present all through out the album, for the time being at least. What's really cool about the song is the guitar riff. Very memorable and emotionally impactful. With this track being the longest on the album, running at 13 minutes, it has the most variation, with half way through, the pace and emotions pick up in the music and comes to a sudden stop with a introspective ambient guitar part which is a really nice touch. It then ends with it picking back up again and closes out the album with the same neck breaking pace the album started with. I really think if they mix more elements from that last track with the rest of the album, it'd make for a very interesting and melancholic album, almost reminding me of early Agalloch.

All in all this album was okay. It was more traditional black metal that didn't really want to stray to far out of the lines. But, that doesn't mean its not boring, its well performed, and plenty of cool guitar parts to make it worth a listen. Check it out if you're trve and kvlt.