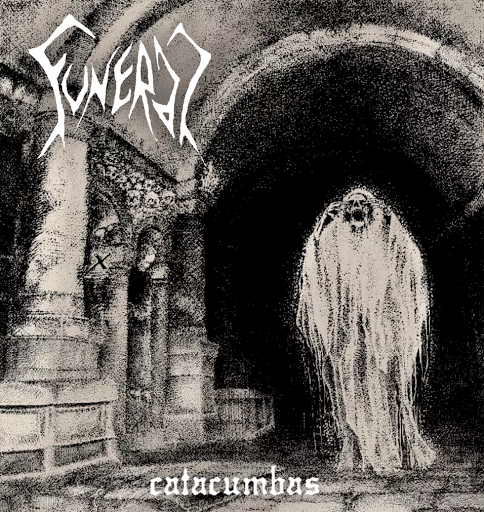 Creeping forth from the dark underground, Chilean black metal occultists Funeral presents us with their second offering known as Catacumbas. A dark and putrid album that reeks of the underground from where it came. This is a very straight forward album that isn't afraid to go straight for the throat to spew its dark message.

Getting straight into the music, after being greeted by a dark and twisted ambient track that truly sets the mood of the whole album, but then you're greeted by lo-fi thrashy guitars and drums that sound massive and truly fill up the space in between the notes. I was surprised to find out that they didn't record the album live within the same room because the way the production is makes one think that they pulled a Darkthrone and recorded live with one another. To me, that's really cool and I love the in between of, yes it is lo-fi and gritty and harsh, especially the vocals, but it still sounds fresh and clean. Not muddying up the music its self.

Speaking of the vocals, Baaltsebal, who plays the guitar, drums, and vocals, really nails his performance. First, he sounds very much like Dead from early Mayhem. Its like this high pitched strained screaming that just is perfect this decrepit album. Like one of the walking dead rising from its grave to spew its vitriol. The riffs are great, extremely catchy and fast paced and plenty of wicked wailing guitar solos from the depths of hell. Not only that but there are some very hypnotic riffs that get you sucked into the music more. The two guitarists Baalstebal and Aphophis work very well together to create some very interesting riffs. It goes to show you that the guitars are really the main focus of the album. Of course there are sections here and there that slow down to draw out the atmosphere in the music, and that's where Noctumbro Profano, the bassist shines.

With the way the production is, the bass is very much buried under the guitars provided by Baalstebal and Aphophis, but songs like Muerete, and Agonia, the bass is very prominent and really shines. The drumming I was sort of in between on liking and really being put off by them. On one hand, the tone of it, is very natural sounding. Very raw and organic. But, they're very primitive. Almost a bit too primitive. Which isn't always a bad thing and given this style of album, its very fitting, I couldn't imagine another style of thrashy, almost off-beat at times and a little sloppy, but it works.

These guys are very much onto something. I was drawn in right from the start with the album. The dark atmosphere truly pulled me into it, and I always find an album memorable when at first you don't really get it right away, but let it slowly build on you. Letting it creep into your psyche and posses you from within to headbang along to it. Much like many other Latin American black metal bands, they're heavily influenced by thrash and it very much shows in the music. If you enjoy black metal with a slightly thrashy bent, then this album might interest you.

PICK UP THE ALBUM HERE

AND THE REST OF THEIR RELEASES HERE